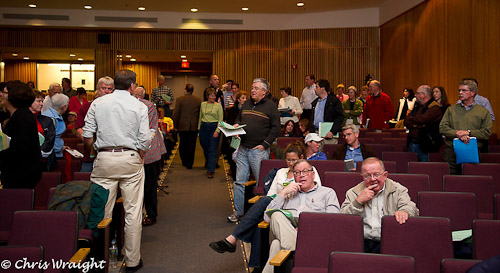 Above: Standing up to vote on the second night of Town Meeting (photo by Chris Wraight)

Many of us spent two long nights this week making decisions that will impact residents of this town for the year to come and beyond. While Town Meeting turnout appeared to be on the high side relatively speaking, it remains the case that the few are making decisions for the many.

That begs the question, when you voted at Town Meeting, were you voting for your own best interests or those of the town? And are they necessarily different?

In arguing for a reduction to the K-8 school budget on Monday night, Advisory Committee member Tim Langella asked voters to think of the greater good. “You’re going to be making that decision not just for yourself, but for people who are unemployed and who are on fixed incomes,” Langella said. “We sit up here not making personal decisions, but looking at what’s best for the community, because that’s what we are.”

But in a comment on this blog, one Southborough mom had a different viewpoint. “People need to show up and represent their interests. I showed up and represented mine. Such is democracy. If a person does not want higher taxes, that person needs to go to TM and make him or herself heard,” commenter ‘mom of two’ wrote. “When I vote, I vote for what *I* think is right for the town and my family – not for what *others* might think.”

Voting ones own interest is perfectly honorable, and may be the most intellectually honest way of voting. The idea that there is some unified vision of the public good that we can all get behind is a fiction.

Let me give you an example. I believe that limited government is, in the long run, the best thing for people because it does not stifle initiative and requires personal responsibility. So, that is my vision of the public good. Now it is pretty clear that lots of people do not agree with me. So it is probably more honest to say I vote my interests rather than presuming to know what is good for someone else.

In the end democracy is about who shows up to vote.

To the extent that one can be objective, I vote first, for what I believe is morally right, if pertinent, then vote for what I believe to be in the best interests in the town. I don’t think we have the elasticity in our budget to separate out the special interests of the schools, developers, conservationists, seniors, non-profits, etc….as they all have such an integral impact on each other. To vote only one issue is perilous, and weakens the cause you are most passionate about. Having proper zoning bylaws, and a vigilant ZBA, an objective conservation commission, etc…., are just as important as having a strong school system to maintain property values.

We will pay for the perpetuation of bad accounting practices of paying for annual expenses, with one time revenues, and furthering the escalation of disproportionate spending between the school and civic budgets. Next year should be interesting.

Having attended several meetings prior to TM, while I can’t speak for them, those on BOS, Advisory, Al, and others who tried to address these issues, maybe in different ways, all did so keeping quality of all services as a priority. They are to be commended for their hard work, even though we, I think mistakenly didn’t choose any of their proposed choices.
(I also care about the quality of education in our school systems.)
I would have liked to have seen a reduction is services offered as a choice, other than those taken by our public safety departments.

That said, every one has the right to vote with their own motives and to speak for their own beliefs at TM. As I have said before, it is the purest form of government and I embrace the right to participate in Town Meeting. Hope to see many of you at meetings through out the year.

An interesting link, with a lot of school information:
http://profiles.doe.mass.edu/state_report/enrollmentbygrade.aspx
( I put the link up on a fairly unbiased page. Click and compare all over this. How can P-town ever cover all that pension debt?)

This is a wonderful question and I applaud Susan for putting it out there.

Southborough TM is a microcosm of our Democratic election process. There will be attendees that come to the meeting because of a strong conviction regarding a particular issue. Some may speak, while others are there only to vote. Their opposition does the same. But while there, most of the voters will have invested a small amount of time in analyzing the other motions on the warrant, and I firmly believe that they remain open to hearing the pros and cons of each article at TM and voting in a way they feel most morally swayed, in other words, for the common good as they see it. For instance, a no-new-taxes voter would still respect the need for the fire department having 2 new infrared scopes, especially after seeing the fire chief hold up the obsolete one at TM.

This is not unlike the national picture. Often a non-binding referendum is placed on the ballot by party leaders to lure more voters on election day, hoping they will then side with the particular party candidates as well. Yet these same voters will want to decide on other issues once inside the ballot box. They will vote based on a combination of financial factors, sphere of knowledge, and their own morals.

Yet in the end, there is that old adage that says “It’s the economy, Stupid.” Our TM is not far from this, since the majority of the warrant and the debate centers around $, whether a citizen wants no tax increases or prefers higher property values.

Only the most idealistic corner of my beliefs can hold hope that there are those who educate themselves on the issues and attend with an open mind, just to be responsible citizens partaking of the Democratic process.

I am disapointed in the fact I cannot answer Susans quetion at all. I was laid off for 11 months, I managed to get a new job about 8 months ago with a company that requires me to be available at odd hours over and above the standard 8 hours a day. I was full of passion on some the issues that were to come up at the TM only to be deeply disapointed when I could not attend because of my job. Things ar tight for me now and I would have liked to taken the “no new taxes” stance at the TM. I have now spent the rest of the week wondering if in fact our voting system in town has flaws. I wonder how many other voters in town could also not attend because of some reason or another. Say a Mom with three kids who had to stay home to care for the children. Even though she would have probable voted against me on say the school budget issue because she has children and I don’t, she should still have an opertunity to vote. Can I get an absentee ballot? Having not missed a single poling vote for 26 years since I was 18, It tears me up I couldn’t be there. Not having a lot of knowledge about other forms of town government, I have to ask if there is a better way for more people to participate in a more user freindly way. Would more people participate if there was? Would the people that don’t go because they have to be up the next day at 4:00 AM and don’t think it’s healthy to stay up until 11:30 PM the night before participate? There are probable hundreds of legitimate reasons why people did not go to the TM. The fact that we have a voter population in the thousands and we don’t fill the auditorium year after year I find sad. Food for thought.

If we’re considering a charter change to town manager and 5-member board of selectmen, we could consider town council and mayor, but it would have to pass town meeting, and the likelihood of that is low. Still, in the modern world, scheduling can interfere with attendance even for voters who want to be there.

We currently have government by the self-selected, including me and many of the other commenters here. TM is pure democracy, but it’s not representative democracy. I find a lot to love in it, anyway, but full participation isn’t one of them.

In general, seniors are present beyond their proportion of the population, though I’m not sure if this is true of the 55+ developments in town. Young people are almost completely unrepresented. I wonder if anyone under 30 was present this past week. We don’t provide baby-sitting for parents of young children, so they are under-represented, too. At best, you may see one parent from a young couple.

Absentee ballots are not available for town meeting. To vote, you have to be there at the time of the vote.

The article that was passed was pretty narrowly drawn and the committee will be tasked with presenting some form of 5 selectmen and Town Manager form of Govt. Of course amendments can (and should) be discussed.

Open town meeting is, of course, not representative only those that show up are represented and that is not, as you point out, that is not representative of the mix of the community. I dare to guess that 75% of the attendees each year are the same people who have come to do their civic duty every year. I for one would like to see Town Meeting on a Saturday which is done in other communities. I think that would improve attendance. But, I would not change anything else about town meeting.

Thanks, Al. I didn’t mean that the currently authorized committee could consider changing town meeting. You’re right to clarify that it couldn’t.

I was really struck by the remarkably very small number of seniors at town meeting. It seemed much smaller than in past years.

Perhaps we should look for ways to increase representation from our seniors at the next town meeting.