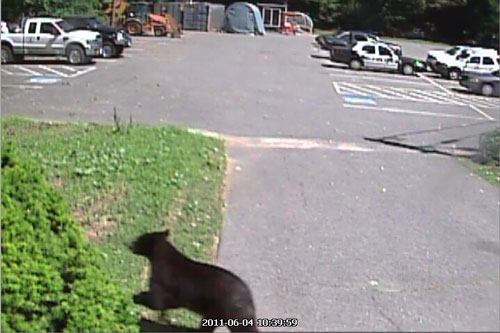 Above: A security camera captured the image of a black bear as it passed by the fire station this morning (photo courtesy of the Southborough Fire Department)

A black bear was spotted in downtown Southborough this morning at around 10:00 am. Southborough Police said the bear was first seen on School Street. It then made its way to the Police Station parking lot (of all places!). It was last spotted on Marlboro Road headed toward Marlborough.

The bear was described as a juvenile weighing 200 to 250 pounds. It’s not known if it’s the same bear that has been spotted in Sudbury and other towns to our east.

Police advise residents to use caution if they see the bear and not to approach it. Keep an eye on your children and pets. They also advise keeping your trash in a covered container and adding a small amount of ammonia to your trash.

Animal Control and Southborough police officers are reportedly out searching for the bear, but word is it’s traveling fast.

Update 5:15 pm: Fire Chief John Mauro Jr. sent along the above photo which was snapped by a security camera at the fire station. He said the bear was also spotted on Ledge Hill Road, Sears Road, and Wyndemere Drive.

Poor bear. It must be scared to death. I hope this has a happy ending…

I think the best we can hope for is that the bear is sedated and relocated. Bears and people don’t mix well. If the bear has become used to people and is eating garbage on a regular basis then it is probably doomed since even if it is relocated it will seek out these easy pickings again and will eventually become enough of a nuisance in some locality to be eliminated.

The best thing for the bear that people can do is to remove potential food supplies (this includes bird seed), never feed the bear, bring your trash inside and keep it there. The ammonia trick is good advice as well.

Nice to see our wildlife making a comeback.

I suppose the same effect could explain how bobcats get reported as mountain lions.

I think I’ll take my camera and go looking.

Now is the time for St. Marks’s to mow the grass near Main St……………..heard the black bear hiked through the high overgrown area.
Perhaps now that school is over for the summer, they could alternate their pattern of manicuring the lawn. Instead of paying attention to growth near their buildings, they could indeed let it just grow naturally, allowing the Main St. frontage to be tended to. That would be a win-win solution.

It ran through the Police lot? I guess this means the Selectmen will approve a THIRD new Sergeant for the Police Department :)

0
living the dream
Reply to  Jimmy

Stay tuned for Jane Moran at the next selectmen’s meeting looking for a hunting rifle and other items to “tame the wild of Southborough”. Tax dollars must be allotted for this so we are safe, otherwise we will have to put another article in the MWDN telling them we can’t keep our community safe and ALL the black bears will be coming here to harm us.

0
Annie
Reply to  living the dream

0
Standing up
Reply to  Annie

Wow, the ceaseless jabs at Chief Moran have now degraded to childishness and outright pettiness. Wonder where the line exists that people won’t cross?

If she reads this blog I hope she realizes that this means she has gotten under the skin of the lowest common denominator in our town. Good for her!

Any more news on the black bear this morning (Sunday)? Since he was spotted on Wyndemere Drive late yesterday, I’m keeping my eyes out for him since I live on Parkerville Road near Rt. 30. Thanks for the good reporting, Susan!

I have a Canon 5D with a 300mm lens! Running around town hoping to grab a great shot! Any other photographers out there searching for a good shot?

There are many communities that live with bear sightings, and visits on a fairly regular basis. The advice given on proper disposal of trash, and caution is all that is needed. No need to relocate or shoot with anything other than a camera. He is may very well be in Boylston by now anyway.
Oh, and please, please, there is no relevance to the bear being in Southborough and the height of St Marks lawn. Let’s come up with a new, inane topic to discuss this year that is none of our business.

It is a bit funny to get two reverse 911 calls asking all of our fellow residents to keep a close eye out for THE BIG BLACK BEAR and wouldn’t you know THE BEAR is ambling by in broad daylight right there between the fire and police stations with police cars parked, at the ready of course.

Who is watching the security cameras? Let’s hire the BIG CAT Diary guys and have them place Bear Surveillance Cameras all throughout town. We could fund a new study and appoint a new Town committee comprised of bear hunters and bear advocates. If we let our adjacent communities know about THE BEAR perhaps it will help stop crime. SAVE and ADOPT the BEAR!!! WE need a mascot.

hey boo boo, is Boylston on the hike to Fitchburg route?

The only reason the bear was traveling by the police department is that the bear could smell the donuts.

Nah! He wanted to hibernate with the guys at the fire department!