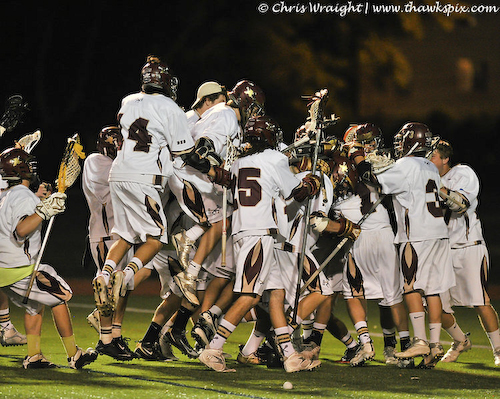 Yesterday was a mixed day for Algonquin sports. The boys lacrosse team beat Grafton in dramatic fashion to advance to the Central Division 1 finals on Saturday. The results weren’t as happy for the girls and boys tennis teams. Both were knocked out of the postseason as they lost their semifinal matches.

The Algonquin boys LAX team got off to a slow start against Grafton, at the end of the first quarter they were down 4-2. They improved in the second quarter and by halftime, the score was 7-6 in favor of Grafton. By the end of the third quarter, the score was tied, 8-8. With 10:18 left in the game ARHS finally took the lead for the first time, 9-8. Grafton then went ahead 10-9 with 4:42 left, but with 1:29 left in regulation, ARHS tied it at 10 apiece. With lightning approaching from the West, the game went into sudden-death overtime and with 1:18 left in the game, Zack Tarallo scored the game winner, with the final score 11-10.

As the defending division champs, the Algonquin girls tennis team no doubt hoped to join their peers in the finals, but it was not to be. The 2nd-seed girls were upset by 3rd-seed St. Peter Marian by a score of 3-2. The boys tennis team fell to St. John’s in their semi-final match by a score of 5-0.

Three things, Congrats Varsity Boys Lax TEAM. Sencond, Defense wins games. To keep St. John’s to 10 is just a great team effort coach and team. Third, I believe this team won be scrapping and winning ground balls. The old fashioned way of boys lacrosse. I watched a few of Coach Luongo’s practices and I was real impressed. Beat the tar out of the other team down low, enjoy doing it, and there you go, 11 goals and more ground balls wins this game. Not to take away from Kraft’s amazing 4 goals as a soph, or Mikey Wood chipping in as a freshman or even Healy’s tremendous effort and goal at the end, but it is a team sport and great job team!