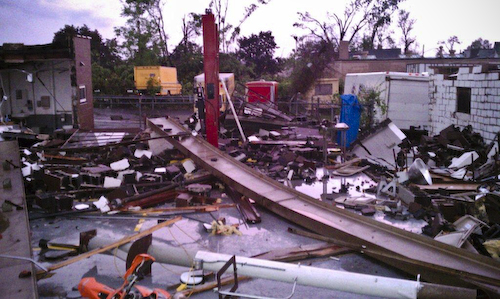 Above: The Massachusetts Vehicle Check Program Motorist Assistance Center in West Springfield was destroyed by a tornado (photo via Massachusetts Dept. of Environmental Protection)

Immediately after the tornadoes hit the Springfield area earlier this month, Southborough firefighters headed to the scene to help. Since then members of the Southborough Community Emergency Response Team (CERT) and Medical Reserve Corps (MRC) have been traveling out to the affected areas to lend a hand. You can read more about their work in this press release.

The Southborough Community Emergency Response Team (CERT)/ Medical Reserve Corps (MRC) have been heavily engaged in the recovery phase of the Tornado disaster that affected the Western part of the State on June 1, 2011. The storm not only caused extensive damage to the area it also displaced hundreds of families and individuals, nearly 300 of whom are still temporarily taking up residence in emergency shelters.

Since the storm, several members of the Southborough CERT/MRC have been working rotating schedules at the West Springfield shelter located on the Big ‘E’ fairgrounds. These members are working on a volunteer basis in various roles, including that of shelter manager. The shelter manager is responsible for overseeing the full operation of the shelter and managing shelter support personnel.

The members are being activated through the Emergency Support Function 8 (ESF-8) desk (Public Health and Medical Services) located within the State Emergency Operations Center at the Massachusetts Emergency Management Agency Headquarters in Framingham.

These members are seeing first had the sadness and logistical challenges that follow a disaster of this magnitude. The experience they are gaining is indescribable and will greatly enhance Southborough’s response to a disaster and sheltering operation of this magnitude should an event strike here, as it did during the 1953 Tornado in which 3 people were killed in the Fayville section of Southborough.

The members of the CERT/MRC have completed numerous trainings provided by the Southborough, Massachusetts and Federal Emergency Management Agencies, Massachusetts Department of Public Health and the American Red Cross to name a few. Red Cross training has included; Shelter Operations and Management, Post Disaster Damage Assessment and Post Disaster Mental Health Awareness. They are also, extensively trained in the National Incident Management System.

The Southborough CERT/MRC is constructed fully of citizen volunteers who reside within and around Southborough and are dedicated to helping the community during emergencies and disasters. The CERT is comprised of individuals who possess a wide range of skill sets, anything from truck drivers to software engineers. The MRC membership is focused on the medical aspects of a disaster and is comprised of Emergency Medical Technicians, Nurses and Doctors.

If you are interested in additional information or becoming a member of the Southborough CERT/MRC, please visit www.southboroughcertmrc.org.

In related news, the MRC recently received the “Most Active MRC in Community Service” award from the regional office of the Commonwealth of Massachusetts Department of Public Health. You can read more about that honor here.