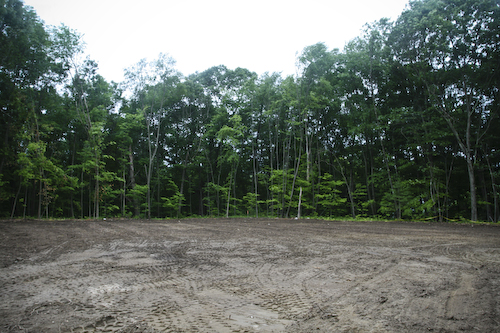 Above: This patch of dirt will soon be transformed into Southborough’s newest playground

Preparations for Southborough’s newest playground are underway. DPW Superintendent Karen Galligan said the site at the South Union School on Highland Street has been cleared and graded, and delivery of the playground equipment is expected the week of July 1.

Voters at Town Meeting in April by a slim margin approved $96K in Community Preservation Act money to fund the playground.

Director of Recreation Doreen Ferguson said the DPW will handle the more technical parts of the playground installation, and then volunteers will be invited to lend a hand by finishing off tasks like spreading mulch. Ferguson said she already has a list of residents who have offered to help and wlll be putting out the call next month for more volunteers.

Ferguson said she expects the installation to happen in July and is planning an opening day celebration for sometime in August. While an official name for the playground has not yet been selected, Ferguson said she’s been calling it the South Union Park.

In addition to the CPA money, Ferguson said local companies have offered services for free or at a good discount. Capital Group Properties cleared the land at no cost. Town Line Rental and Arrow Fence offered discounts on their services.

The town was also awarded a Choate grant from St. Mark’s School, and has received donations from the Friends of Southborough Recreation.

Great Job Mrs. Ferguson! The Recreation Department is one of the gems of Southborough. A Great resource for my family.
Thank you!

As I was playing with my son on the playground at neary today, and noticing its state of disrepair, it makes me think that building another playground when we don’t maintain the ones we have is a mistake.Clearly the play structures at the schools are a higher priority and I think this money would be much better spent on keeping them safe.

GREAT question for the school committee! How much $ do they allocate for maintenance of their playgrounds?