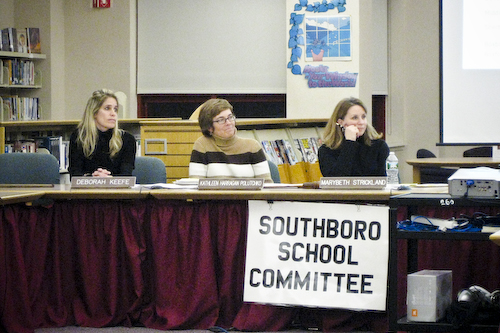 Calling it a “very modest increase,” Superintendent Charles Gobron asked the K-8 School Committee last night to approve a budget that represents a 0.68% increase over the previous year. The school committee voted to do just that, but not before some debate over the request.

In the latest version of the budget, Gobron trimmed spending requests by $37K over the preliminary budget he presented last month. That budget laid out a 0.9% increase over last year.

Gobron said miscellaneous reductions and a renegotiated lease for the district’s photocopiers accounted for about half of the reduction. The other half came from the decision to postpone a request for a new district-wide network administrator.

In approving the budget, the school committee debated whether to reinstate the network administrator position, noting it was projected to bring the district savings in the long run.

Gobron said the resource would be shared across the regional district, and he didn’t believe it would get support from the other school committees.

Ultimately, members voted 3-1 to approve the budget. While mostly on board with the numbers, school committee member Deborah Keefe voted in opposition saying she would like to see more money go toward technology needs. The fifth committee member, Susan Dargan, did not attend the meeting.

The FY13 budget approved last night by the school committee totals $16.99M, which is $114K more than the current fiscal year.

At the start of the budget season, the Board of Selectmen asked all departments, including the schools, to present budgets that were reduced by 1% over the current year in an attempt to minimize any tax increase for residents. Gobron told the school committee last night that trimming the budget to that level would result in the loss of three teaching positions and five support positions.

I like others want to provide the children of our community with a quality education. Supporters of public education should read John Butlers tale of frustration in dealing with (or failing to deal with) the K-8 Schools and their budget process.

Be sure to read the lengthy account in the link at the bottom of the page to understand how little transparency there is in the supervision of millions of your tax dollars.

Let’s use the money that the town waste on legal fees to cover the cost.

John’s document in the link is lengthy, but a great description of the frustrating, obstructionist behavior that School Committee seems to have adopted as standard policy. Advisory has very reasonable requests, that I can’t for the life of me understand why School Committee wouldn’t meet.

All those who will stand at Town Meeting and blindly defend the latest school budget increase, should at least read John’s document before they do so. It might cause them to question their decision to defend so boldly.