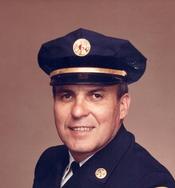 Thomas Joseph Potenza, age 74, of Northbridge, formerly of Framingham, died, Saturday, February 11, 2012 at his home in Northbridge surrounded by his family.

He was the husband of 50 years to Patricia (Annesi) Potenza of Northbridge.

Born in Franklin, NH, he was the son of the late Bennie and Marie (St. Pierre) Potenza.

Mr. Potenza was the Deputy Chief for the Framingham Fire Department for many years. He was an instructor at the Massachusetts Institute of Fire Department Instructors and a member of the International Association of Firefighters.

He served as a Sergeant for the U.S. Marine Corps and was the former Commandant and current Judge Advocate for the Marine Corpse League – Detachment 1037. He was also a member of the International Union of Operating Engineers Local 4.

Mr. Potenza ran the annual Marine Corps League Charity Golf Tournament for 10 years and also the Natick Elks Golf League. He was an active member of the Christopher Columbus Society in Framingham, the Natick Elks and Toys for Tots.

Relatives and friends are invited to attend his funeral Mass on Thursday, February 16, 2012 at 10 AM in St. Stephen Church, 221 Concord St., Rt. 126,Framingham. Burial will follow at St. Tarcisius Cemetery, Framingham. Visiting hours at the Norton Funeral Home, 53 Beech St. (Corner of Union Ave.), Framingham will be Wednesday from 4 PM to 8 PM. In lieu of flowers, expressions of sympathy in Mr. Potenza’s memory may be made to Wounded Warriors Project, 370 7th Ave., Suite 1802, New York, NY 10001 or the American Cancer Society, 30 Speen St., Framingham, MA 01701.