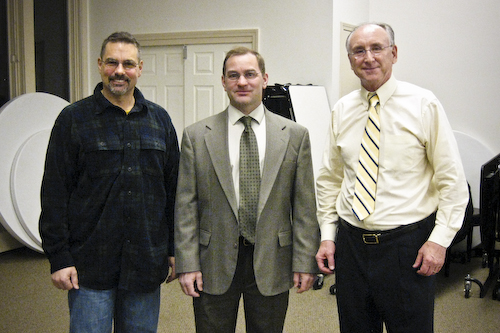 The name at the top of the new Fire Department org chart is going to look familiar to most of you. It’s Mauro. After a unanimous decision by selectmen last night, Joseph Mauro will succeed his brother John Jr. as chief of the Southborough Fire Department.

Mauro has been a name associated with firefighting in Southborough for decades. Joseph joined the Southborough Fire Department in 1981 as a call firefighter, rising to the position of captain in 1987. Brother John Jr. retired last fall after 38 years in the department, 11 of them as chief. In 2010, their father John Sr. retired after 50 years with the department.

In promoting Joseph Mauro last night to the position of chief, selectmen said he would offer “a steady hand at the helm.”

The decision came after the board interviewed three finalists for the position, including Mauro, Southborough Lt. Chris Dano, and Deputy Chief Fred Mitchell of Cumberland, RI.

While selectmen were ultimately unanimous in offering the job to Mauro, they said it was not an easy decision to make, calling all of the candidates “impressive.”

Selectman John Rooney backed Mauro from the start, but Selectmen Bill Boland and Dan Kolenda said they were torn between Mauro and Mitchell.

In preparing for his decision, Rooney said he talked with firefighters both in Southborough and surrounding towns and was given the advice that unless something was significantly broken in the department, the decision should go to an internal candidate.

After some deliberation, Boland agreed and opted to back Mauro. “I don’t think there’s anything significantly enough broken in our department (to go with an external candidate),” he said.

“You know the town incredibly well, and I think the town knows you,” Kolenda said to Mauro. “You’ve earned it through your dedication.”

In his interview last night, Mauro said one of his priorities as chief will be to provide more training opportunities for both full-time and on-call personnel. He said he would also like to see the department staff increased to have five firefighters on duty at all times. Currently, two shifts have five and the other two have four.

Described by selectmen as thoughtful, quiet, and steady, Mauro said he hopes to continue the legacy of good work at the Southborough Fire Department.

“I would like to see the department continue the great service it provides to the citizens of town,” Mauro said.

Congratulations on receiving an honor you so clearly deserve and wishing you a smooth transiton.

A recap of the mysouthborough.com blog posts on the Fire Chief Search and process:

5/18/2011 “Selectmen discuss how to hire new fire chief”
“I’m not sure the (police chief) search committee proved to be best vehicle for the process,” Selectman John Rooney said. “Those who don’t learn from history are doomed to repeat it.”

“Rooney’s primary complaint at the time was that the consultant hired to assist the process was not allowed to fully participate. He said for the fire chief search, the consultant should be involved from the beginning.”

“For the fire chief search, Rooney said he would not support the creation of an ad-hoc citizen committee like the one used during the police chief search. Instead, he recommended bringing in retired fire chiefs and paying them a small stipend to assist with the process.

“They know exactly what we should be looking for in a fire chief,” Rooney said. “I’m not sure citizens, myself included, would be able to add much.””

12/13/2011 “Breaking News: Two finalists for fire chief announced” – both from outside of the SFD

“Selectmen have maintained that the goal is to find the best candidate for the job regardless of whether they are promoted from within the Southborough Fire Department or not.”

In preparing for his decision, Rooney said he talked with firefighters both in Southborough and surrounding towns and was given the advice that unless something was significantly broken in the department, the decision should go to an internal candidate.

—
I’m not suggesting in any way that Chief Mauro is not the right person for the job.

Yes, I’ve referenced the words of Selectman Rooney. It’s not to give him a hard time, it’s only because he’s quoted the most. And I appreciate and respect that an open mind is one that adjusts as the facts and one’s understanding changes.

How would a process like this be different under the proposed Town Manager structure?

Is it more likely that it would be an improvement, or something else?

Great work. So see if I got this straight. The old chief gives over six months notice but that still isn’t enough time to find a replacement. There is no “in house” canidate to fill in on an interim basis, but over a year later there is one “in house” good enough to be chief. Wow, he must have learned a lot in the past year from the interim Chief. Would it have been better to give the interim Chief position to the “in house” canditate and see how he does during the selection process? Isn’t that what we did with the Police Chief?

When an interim chief was appointed they gave and explination why they weren’t internal. They wanted to make it a fair game for all candidates, thinking an internal interim who is also applying for the position would get the step up. If you remember the police chief hiring process, you’d understand why they did it that way. Very wise decision from the BOS.