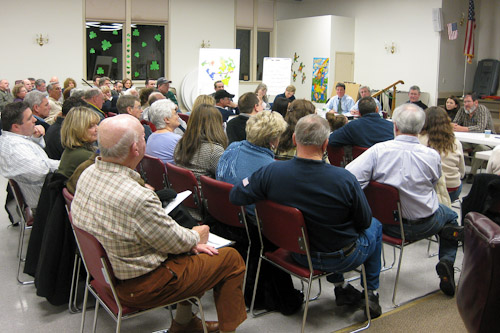 Above: Residents attend a public hearing on proposed zoning bylaw changes in March 2010

For the past several years a group of volunteers has been working on an overhaul of Southborough’s zoning bylaws. The goal was to have it ready for voters to consider at Town Meeting in April, but the committee has decided to hold off on the vote.

Morris said the work is almost done. A draft is finished and has been reviewed by a consultant, he said, and will be available sometime in the next few months.

Morris said the committee wanted to give the public enough time to review the information and not rush the topic to Town Meeting.

You can read the full story in the MWDN here.

This may be the first time some of you are hearing about the zoning overhaul project. Check out these past posts to learn more.