It’s primary day, and let’s face it, the Republicans are the ones having all the fun (if you want to call it that), and with native son Mitt Romney on the ballot, local officials predict a decent turnout in today’s election.

Statewide, Republicans make up just 11.9% of registered voters, compared to the 35.9% who register Democratic and the whopping 52.2% who don’t affiliate with any party. In Southborough things skew slightly more red with just under 18% of voters saying they’re Republican. At nearly 59%, Southborough also has a larger number of independent voters than the state average.

Here’s a look at how our voting electorate is divied up. 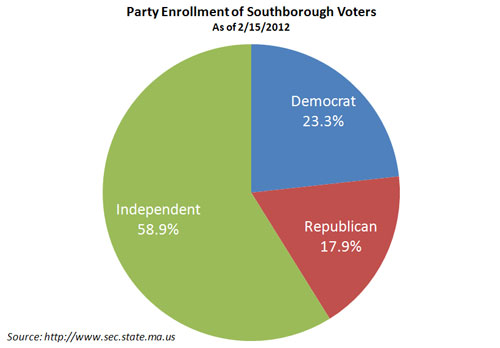 Of course, Republicans and Democrats aren’t the only game in town. The statistics provided by the state are a bit difficult to reconcile, but if I’m reading the data correctly, in addition to its red and blue voters, Southborough also has four voters enrolled in the Green-Rainbow party, two Libertarians, and one who claims to be a member of the Pirate party. I swear I’m not making that last one up.

Wow! Surprised to see so many independent voters! I am one, but always felt like that made me an outlier. Apparently not!

Reminder that most of those “independents” are actually termed “unenrolled” when you get to the voting locale. If you ask for an “independent” ballot, you might get a ballot for the teeny tiny “independent” party. If you are unenrolled, you can choose your ballot from any available on the day of primary voting.

wow – the Pirate Party! I want to see them represented in the Heritage Day parade!