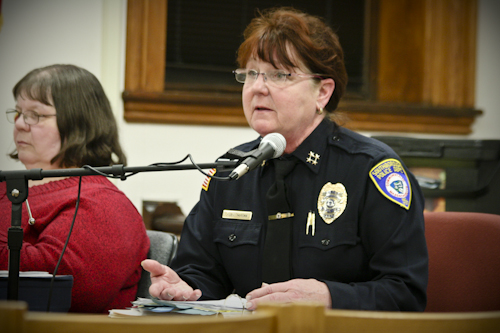 Police Chief Jane Moran asked selectmen for an increase of about $90K to the department’s overtime budget for fiscal year 2013, saying she ran the numbers and determined that’s what the department will need to operate safely next year. But selectmen lowered the request arguing it was excessive.

Moran told selectmen and the Advisory Committee at their joint meeting last night that the nature of police calls has changed over the past couple of years, becoming more violent and more “intense.” She said the increased overtime was necessary to keep three officers on shift at all times, the minimum she said was needed to ensure the safety of officers and the public.

“It’s just no longer safe to run with two (officers on shift),” she said.

Advisory Committee member John Butler said Moran was budgeting for the maximum, not the average. “I’d have to start feeling pretty unsafe walking down the street (to support these numbers),” he said. Butler asked for more data on how police calls today are different than those of a few years ago.

Selectman Bill Boland agreed, saying that with the exception of the past two years, the town typically does not exceed $140K in yearly overtime pay. Boland called the last two years “extraordinary” in terms of the amount of overtime needed, citing an unusually high rate of officer turnover and extended injury leave.

“I don’t see that happening this year,” he said. “I think those issues are resolved and we can look forward to some more stability ahead.”

Moran said her overtime request represented a “worse-case scenario,” and that the department has done everything it can to minimize overtime. “We’re not at all careless with this overtime budget,” she said.

Boland recommended reducing Moran’s overtime request to $140K. Selectman Dan Kolenda agreed and voted with Boland to set the total police budget for Town Meeting to consider at $1.62M, a 4% increase over the current year. Selectman John Rooney abstained from the vote saying he didn’t have enough data to determine whether $140K in overtime will be sufficient.

Per Town Meeting rules, voters can decide to lower the amount of a budget printed in the warrant, but they cannot increase it.

What happened to the BOS demand that all departments submit a – 1% budget? Can you imagine if the School Committee was recomending a + 4% increase?

Here are a few random thoughts for you.

Maybe the BOS is expecting a lower budget from the BOE to help for this additional service.

If Mr Rooney says there is not enough data to make the call, sounds like another town official needs to do a little more homework before TM.

A highly paid public professional who gives rah-rah speeches at TM in order to pass a budget (and let’s not forget contract approval shenanigans) should get little slack from taxpayers.

You are doing better with the MCAS discussion.

Comment:
I don’t know if the police department needs more overtime.
I do know:
-that the Transfer Station is closed Monday and Tuesdays vs open every day.
-I suspect that police patrols are at the minimum for a town our size.
-I suspect that the fire department uses overtime to insure that fire trucks respond with more tha a driver.
– the annual budget for the buildings department is shaved every year. Al Hamilton will tell you (former Capital Budget committee member) that if you don’t invest in the capital budget , town facilities will deteriorate and end up costing taxpayer’s more in the end.
– the DPW continually juggles people and budgets for the transfer station, cemetery ,road salt stockpile, water department etc.

We also know Seletman Roony has asked specific questions regarding our school system. I don’t know if he has gotten satisfactory answers .
Al Hamilton has quantified the percentage increases of the step, lane, and teacher contracts and they are quite hefty. ( I realize other departments have steps and lanes).
John Butler has addressed the quality of the education provided.

I question as to what percentage of the town budget was the schools 10 years ago vs today where it is the elephant in the room. Is the school budget creeping up faster than other town budgets? Our student teacher ration is14.1. If it went to 15 to 1, I assume that we would loose 10+ teachers. Dr Gobron probably would not have to “fire” any teachers. There is normal attrition every year with retirements and leaves of absence. Ask the SC how many teachers have been hired in the past few years.
I also suspect that MCAS scores and graduation rates would not plummet if the student teacher ratio went to 15-1.
Many of the townspeople, my self included, have paid our taxes which support our schools, without ever having children in the system. I realize that a good school system supports the value of our houses. Wait a minute! The value of my house has dropped 25%.
Watch out, with budget creep you may wake up some day and think you are living in Weston, or Wellesley ,or Wayland when you look at your tax bill.

I will make my best effort at becoming educated before I offer a recommendation at TM. The major questions I need answered right now (i.e., my homework) are (1) do we need additional police officer coverage for certain shifts; and, (2) if the answer to (1) is yes, would the town spend less if we hired an additional officer rather than pay OT to existing officers. It was the lack of this data that caused me to abstain when we took the formal vote. Once I get that information, I will be comfortable in making a recommendation.

Thank you for your reply. I am certain beyond doubt that you will be doing your homework. My post should have been more clear. I am thinking that if you are uncertain about the increase, then Ms Moran needs to do more homework.

During this time of year, you and many other people who serve Southborough put in a lot of time to prepare for TM. This sometimes sharp opinionated poster understands that and thanks all of you.