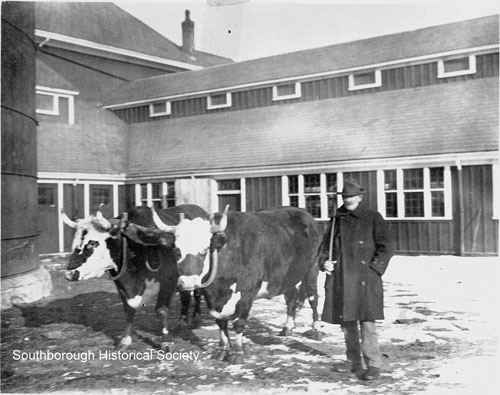 Above: A photo from Deerfoot Farms (via the Southborough Historical Society)

I came across this fascinating tale on the web the other day and had to share. In May 1911 contaminated raw milk killed 48 people in the Boston area and sickened an estimated 1,400. The source of the milk was traced to Southborough’s Deerfoot Farms.

It was believed the milk carried a contagion – thought to be either staphylococci or streptococci – that led to an outbreak of tonsillitis. Common symptoms included severe headaches, acute abdominal pains and high temperatures of 103 to 105 degrees.

Deerfoot Farms had a reputation for providing safe, high-quality milk, but these were the days before pasteurization, and despite “stringent rules” employed by the dairy farm to prevent human disease, Deerfoot Farms was fingered as the source.

Founded in 1847, Deerfoot Farms was a major employer in Southborough. At its peak, the company owned nearly 1,000 acres of land in town and bought milk from 129 local area dairies to supplement its own herd of approximately 150 cows. They also produced sausages and other pork products.

A biologist who investigated the tonsillitis outbreak reported most of the affected patients in the Boston area got their milk from Deerfoot Farms. All who died were over the age of 55. A second smaller outbreak was discovered in the Southborough area, but the source in that case was not believed to be milk. Among the sickened in Southborough were 42 boys at St. Mark’s and 17 at Fay School.

Deerfoot Farms sourced its milk at the time from farms in Southborough along with those in neighboring towns, but the origin of the contaminated milk was determined to be Southborough.

In his report, public health pioneer C.E.A. Winslow absolved Deerfoot Farms of any negligence. “I am at a loss to suggest any other precautions that could have been taken to guard against infection with human germs of disease, that were not taken in this instance,” he wrote. But he noted pasteurization would have prevented the outbreak.

According to the Southborough Historical Society, Deerfoot Farms began in-bottle pasteurizing in 1911, the same year as the outbreak, becoming “the most famous and one of the very few dairies to do so.”

Another intersting milk story would be about the 2 incidents in Massechusettes that occured at Whitier Farms. This famous dairy pasturizes all it’s milk and still managed to kill people on 2 occasions in the last 10 years including 4 dead in 2008. Or how about the incident in Illinois in 1985 where pasturized milk made 260,000 people sick and killed at least 17. Meanwhile no one has died from raw milk in 50 years. Why the interest in 100 year old stories about milk? Were there any other reasons people got sick in 1912?

somebody woke up on the wrong side of the bed !