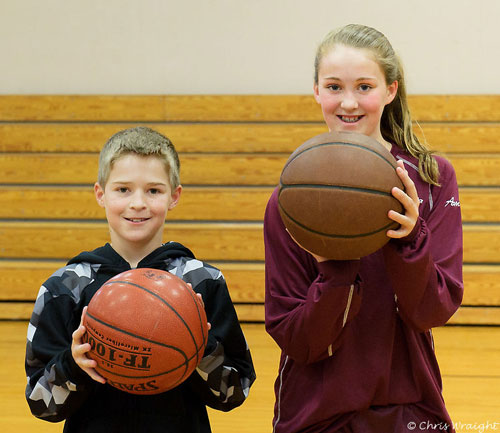 Above: Zach Zides and Amanda Carroll are going far with their free throws (photo by Chris Wraight)

A My Southborough reader sent in this story about two Trottier students who know how to hit their free throws. Amanda Carroll and Zach Zides will compete next weekend in a state free throw tournament.

The long road to the tourney began right here in Southborough. Read all the details below and join me in wishing Amanda and Zach the best!

Two local 6th graders at Trottier Middle School, Amanda Carroll and Zach Zides have both enjoyed a fun ride through the area participating in the Knights of Columbus Free throw shooting contest. Both strong student athletes at Trottier, they are dedicated basketball players for their 6th grade town and travel teams. Both the girls and boys travel teams experienced great success this year; and this foul shooting contest has been a unique way for Amanda and Zach to individually represent the Town of Southborough in the State Finals of the event next weekend on April 7th at Regis College.

The competition started locally at Trottier with Amanda putting forth a strong effort, making 12 out of 15 shots and qualifying to move on to the district level competition in Milford. Zach also did very well winning the local event making 13-15 shots and moving onto Milford with Amanda representing the Town of Southborough.

At the district level round in Milford, Amanda was the first player in all age groups to take her shots. In front of a packed gymnasium, she made 22 out of 25 free throws, ultimately defeating the next closest competitor in her age group, who hit 17 out of 25 free throws. Zach was really focused against his competition and sank 22 out of 25 as well within his bracket. With their performances, both Amanda and Zach qualified for the regional round in Webster.

The regional round was highly competitive with most age groups seeing six or more shooters competing for the regional championship. During this round, the kids took their shots in front of hundreds of spectators, in a pressure-packed environment. The 12 year old girls group championship was highly contested with all six girls in the group making between 12 and 17 shots. Amanda, along with one other girl, made 17 out of 25 shots and had to move to a five shot shoot out. In the shoot out, Amanda was able to make one more free throw than the other girl, hitting 3 out of 5 and qualifying for the state championship.

On the boys side, the competition was also very intense. Zach had to beat nine top players within his group. Zach was clutch matching the top shooter following his impressive performance, making 22-25 shots. When it came to a shoot out, Zach calmly sank 5-5 and the other player came up short. Both Zach and Amanda will now represent the Town of Southborough at the State Finals next weekend.

Both players are very committed to basketball and their travel coaches believe in their ability to succeed and wish them well in the Finals next weekend.

“Amanda is obviously a great basketball player: great shooter, intense defender, strong rebounder, very athletic, etc. And she loves the game! But more importantly, she’s a great young lady. She works hard, hustles, listens, respect others, and is an overall wonderful teammate. She’s the first girl on the floor, and the last one to leave. It’s wonderful to see a girl like Amanda succeed in this competition, and get recognized for her efforts,” said Todd Alcoc, Amanda’s travel coach.

“I couldn’t be happier for Zach,” BJ Dunne, Zach’s AAU and travel coach said. “I am so impressed with his work ethic and commitment to the game of basketball. He has a great passion not only for the game of basketball but also for success. He is one of the hardest working 6th graders I have come across and deserves this accomplishment. Zach is just a terrific all-around kid and leads by example through his work ethic. So proud to say I am his coach and wish him the best of luck next weekend.”

Jim Sullivan from the Southboro Knights of Columbus, and the Town of Southborough wish all the best to both players next weekend!

Way to go Amanda and Zach! Good luck in the State Finals! Southborough is really proud of the both of you! JoAnn Tobin

Congratulations Zach and Amanda!
Good Luck in the finals. We will be rooting for you both!

I am VERY impressed. Great job.

Show me a great free throw shooter and I’ll show you a hard worker! Very impressive .Best of luck to both Amanda and Zach! We here in Southborough are all proud of you.