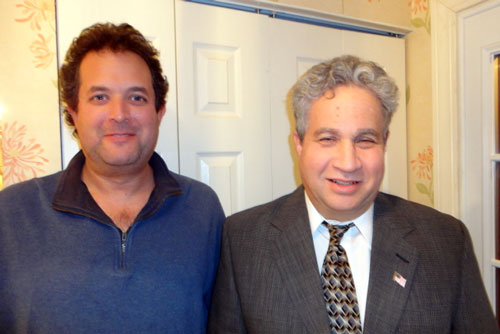 An announcement from the campaign of Marty Lamb, who is running to represent Southborough, along with the rest of the 8th Middlesex District, in the state legislature.

Marty Lamb, Republican candidate for State Representative, proudly announced that Jeff Rosenberg has signed on board to be the Southborough Town Captain.

“Jeff Rosenberg has been active in Southborough for years. I am proud to have him as a member of our team. He will help us be victorious in Southborough next November,” said Lamb. “Jeff has become an integral part of our campaign, because he wants to see Secure Communities implemented in the Commonwealth. Like me, he thinks it is wrong that the Governor has failed to activate the program that will help deport criminal illegal immigrants.”

Last week surrounded by a huge crowd of friends, family, and supporters, Lamb formally launched his campaign for State Representative. As our next State Representative, Lamb wants to improve our economy, restore integrity to the State House, implement Secure Communities in the Commonwealth, and fight for fight fiscal responsibility.

“I am not about to sit on the sidelines when our Governor and legislature keep failing to protect the legal residents of our state. I know that we can count on Marty Lamb to fight for implementation of Secure Communities. Enough is enough. It is time for new leadership. That’s why I like Lamb,” said Rosenberg.

Jeffrey Rosenberg is a business owner and resident who operates Modulation Magic Inc., a broadcast engineering firm, and Every Body Balance Inc., a Pilates and Yoga studio, with his wife, Kelly. Jeff and Kelly’s family consists of 4 children ranging in age from 10 – 16 and 2 dogs. Jeff is always visible around town volunteering and enjoys participating in his community.

Ms. Dykema has a track record to defend. I would like to hear from the candidate on which votes Ms Dykema has cast that he would have voted differently on and why.

Secure communities is not a pressing issue. Important but not pressing. It is also a code word for those who do not like immigration in general.

What are the code words for “fed-up with how the state is being run?”

Secure Communities is an Obama administration program to helpe keep us safe from ILLEGAL aliens who commit crimes. Deval Patrick and Carolyn Dykema are on the wrong side of it and do not support the program. ILLEGAL aliens are committing crimes and getting free health care from the Democrats on Beacon Hill. Patrick and Dyekma are WRONG !!!!

Free health care? If an illegal alien shows up to the ER in an emergency, he gets treatment – thanks to Federal law passed during the 1980s and signed by President Ronald Reagan.

Secure Communities sounds like a good idea in theory, but in practice it has often failed to focus on the violent offenders, spending precious law enforcement and court time on minor offenses that are not a big threat to public safety. The violent felons and drug importers are the people we most need to get off the streets and out of the country.

Really? Is Mr Guaman still in the US?

How about Onyango Obama? Or will he be a keynote speaker at the Democrat State Convention?

If you want to believe that there was no deportation of violent illegal aliens prior to the time Secure Communities passed in 2009, I can’t stop you.

Nicolas Guaman is in jail awaiting trial, having been denied bail. He’s also subject to an ICE detainer warrant. A relevant quote from the story you linked:

Denice’s family has called for him to receive a lengthy sentence in the U.S., rather than simply being deported.

The President’s uncle has been here since the 1960s. It’s appalling that the toddler future President didn’t deport him as soon as he was out of diapers. But there’s not even an allegation that Onyango is a violent offender.

Also, the economy is in a mess, and the Democrats on Beacon Hill are not telling the truth about job numbers. Our economy is in a rut and won’t recover with the current people on Beacon Hill. We need a big change ! New legislators who don’t follow the line of corrupt Speakers and vote the way they do, BLINDLY !

The Massachusetts economy is still better than the economies of states run by Teapublicans like Marty Lamb. Our unemployment rate is still relatively low.

Unemployment in America is still too high, mostly due to the open obstruction by the GOP in Washington of anything that could possibly be a jobs program.

The wild and reckless charge from Lamb’s supporters that Beacon Hill is not telling the truth about employment depends on readers not knowing enough background. What happened? The Federal Bureau of Labor Statistics changed the way it counts unemployment, seeking a more accurate number. It did this in the bright light of day.

Our unemployment rate, remember, is still better than the country’s as a whole.

Long story short: Lamb’s people are trying to deceive you when they call the measurement change a deception.

True to form, Massachusetts employment numbers in the past couple of months are once again improving.

Interesting that Mr. Lamb’s website is silent when it comes to his stance on prochoice. In the 2010 election, he was identified as a candidate who was against a woman’s right to choose:

“In the Congressional race against Pro-abortion Jim McGovern there are several Republican candidates in the Primary who would be an improvement on McGovern’s push for unlimited access to Government funded abortions include; Robert Delle, Brian Herr, Marty Lamb, Mike Stopa.” (http://dtf-jayg.blogspot.com/2010/09/primary-election-pro-life-endorsements.html).

Funny I do not see anything on Ms. Dykema’s web page on where she stands on EBT card reform.