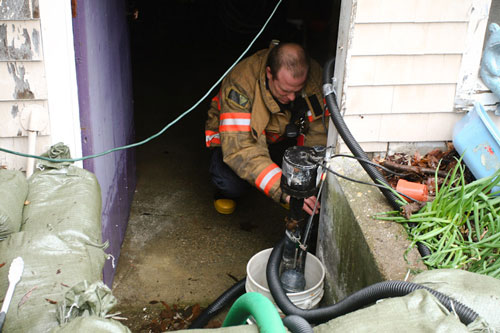 Above: A Southborough firefighter pumps out a flooded basement in March 2010

Mauro told selectmen and Advisory Committee members at a meeting last month that the bylaw, which will be voted on at Town Meeting next week, is not aimed at residents who have occasional water issues, but at those who are repeat offenders.

“It will be used for people who had a sump pump but didn’t maintain it, or people who knew they had a problem but didn’t take any steps to deal with it,” Mauro said. “There are a few people we go to continually.”

They bylaw would allow the chief to issue a warning for the first offense, and then charge $50 for the second offense and $100 for each subsequent offense.

The bylaw is modeled after one in Sudbury implement by then-Fire Chief Michael Dunne. Dunne served as Southborough’s interim fire chief before Mauro was appointed earlier this year.

The intent of the bylaw is not to generate revenue but to encourage residents to maintain their private pumping equipment instead of relying on the fire department, Mauro said. “It will ease the burden of tying up men and equipment for people who could have pumped on their own.”

Whether to assess the fine is up to the discretion of the fire chief, and Mauro said he would not apply it when there are extenuating circumstances like a power outage or in the flash flooding the town saw in July 2009.  He also said it would not apply to areas where there are known problems like on Wood Street which backs up to the Sudbury River.

Several Advisory Committee members suggested making the criteria for assessing the fine more explicit instead of leaving it up to the discretion of the fire chief.

Selectmen seemed to generally favor the bylaw, but did not vote on whether to formally support it. They will render a decision at Town Meeting on Monday.

What do you think? Is the bylaw a good idea? Will you support it at Town Meeting? Share your thoughts in the comments.

I agree with the point of the by-law. People should be responsible for their property. I now have two pumps in my cellar because I know I have a huge chance for flooding. A warning from the Fire Chief would serve as notice to any homeowner that they now must prepare themselves. Also, the fact that the Fire Chief takes into consideration power outages is important here. I would support it at Town Meeting.

I didn’t even know the Southborough Fire Department offered this pumping service! I try and keep my sump pumps in working order for my flood-prone cellar. If residents are abusing this service, then I would support the charge.

And that’s the point of the by-law Joyce. I spent 28 years on the fire department, and whenever there was flooding, we were there to help. There are people who take advantage of it and don’t take the necessary steps to prevent basement flooding. The majority of folks only call when they become overwhelmed by sudden flooding after very heavy rains, and that’s okay.

Agree with previous comments. People who abuse public services should pay for them! Taxpayers should not have to support abusers of the public services available.
The fees suggested are not enough to detour the abusers. Make it at least $1000.