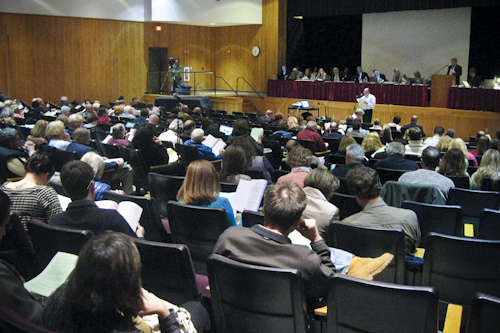 After two hours of discussion on the floor of Town Meeting last night, most seemed to agree that Southborough’s government needs fixing. What voters didn’t agree on was the mechanism by which to fix it. With that impasse, and by a margin of only 11 votes, Town Meeting decided to indefinitely postpone a decision on whether to adopt a Town Manager form of government.

“Disappointed is an understatement,” Drafting Committee Chairman Joseph Laning said of his reaction to the outcome. Laning and his committee have met nearly every week for the past year to craft the legislation.

If adopted in full, the legislation would have expanded the size of the Board of Selectmen from three to five, and created the position of Town Manager to run the day-to-day operations of the town.

The motion to indefinitely postpone the article came from Leo Bartolini, a member of of the committee that drafted the legislation. In a minority reported filed last week, Bartolini said he favored splitting the article so voters could separately decide on the questions of expanding the Board of Selectmen and creating the position of Town Manager.

Several residents last night said while they did not support the proposal to move to a Town Manager form of government, they did support increasing the size of the Board of Selectmen.

“If it’s indefinitely postponed, this thing dies, and the capability of voting on a five-member Board of Selectmen dies along with it,” Advisory Committee Chairwoman Claire Reynolds advised voters.

The vote to postpone that followed was a close one, requiring a standing count. In the end 112 residents supported the motion to postpone while 101 opposed it.

When the count was in, and with the hour approaching 11:00 pm, many voters began filing out of the auditorium. The exodus was stopped when a member of the Advisory Committee (I couldn’t see who it was from where I was sitting) made a motion to reconsider the vote to postpone, saying he wanted residents to have a chance to vote on a five-member Board of Selectmen.

“I don’t think people knew what they were voting on (when they voted to postpone),” he said.

But the attempt to reconsider – which requires 2/3 majority – failed by a wide margin, with 98 voting in favor and 108 opposed.

Having fulfilled the charge set at Town Meeting last year, the Drafting Committee will now be disbanded, but several residents said the push to change the town’s government doesn’t end here.

While vocal in his opposition to the article, saying it gave up too much control to the state legislature, former Advisory Committee member Al Hamilton pledged to bring a new proposal before Town Meeting in the future.

“Indefinite postponement doesn’t make this issue go away,” Hamilton said. “My promise to you is if no one else (brings it to Town Meeting again), I will.”