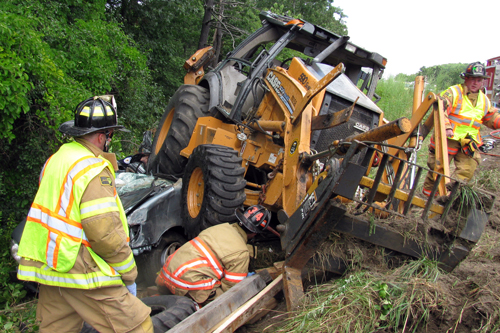 Above: Southborough firefighters at the accident scene on Route 495 last August (photo courtesy of the Southborough Fire Department)

An elderly Westford woman was killed last August when a backhoe fell off a National Grid truck on Route 495 in Southborough, crushing the minivan she was riding in. Also in the car and seriously injured were the woman’s daughter and two grandchildren. Now the woman’s family is suing National Grid for negligence.

“This was a completely preventable tragedy and National Grid’s reckless conduct put not only my family and the emergency personnel in danger, but also all of the other drivers on Route [sic] 495 that day,” said Frank Ye, Wang’s husband and the administrator of Jiang’s estate, who filed the suit along with Wang.

The family’s attorney, Bradley M. Henry, said the National Grid driver was ordered by his superiors to conduct a test drive of the combination of a six-wheeled dump truck and flatbed truck with backhoe on it.

“For a corporation as large as National Grid, with the resources of National Grid, to conduct a ‘test drive’ on a busy Friday afternoon on one of the most congested roadways in Massachusetts is the very definition of ‘gross negligence’,” Henry said in a statement.

You can read the full story here.