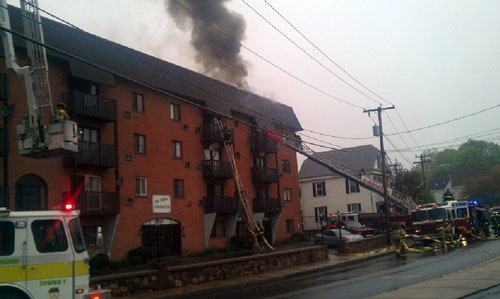 Above: Crews are battling a fire at 273 West Main Street in Marlborough (photo via Twitter)

The Southborough Fire Department has sent crews and equipment to a 4-alarm fire at an apartment building in Marlborough, according to scanner traffic.

The fire is located at 273 West Main Street (map). A section of Route 20 near Williams Lake is reportedly closed while crews battle the blaze.

Reports on Twitter say firefighters were just ordered to evacuate the building.

Update 10:45 am: A fifth alarm has been struck in the Marlborough fire.

Update 11:15 am: It’s now a 6-alarm fire. From what I can tell from scanner traffic, crews from Southborough, Northborough, Framingham, Ashland, Westborough, Shrewsbury, and Wayland are either on scene at the fire or covering the Marlborough station. Reports are the building has been fully evacuated.

Update 1:00 pm: Crews are still battling the fire. The Red Cross is on scene helping those displaced. Many roads in the area are closed, including the exit from Interstate 495 to Route 20. Lots of media coverage now. You can follow updates on the Metrowest Daily News and WHDH Channel 7. Here’s a photo posted to Twitter just a few moments ago that shows the Southborough ladder truck in action along with heavy damage to the building. 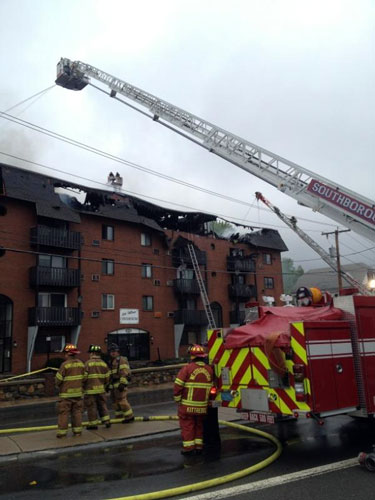 Susan…..the evacuation was pulling all the firefighters out of the complex for safety reasons.