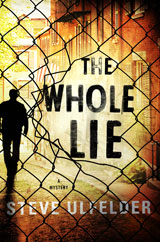 Conway Sax fans rejoice! The Metrowest-based auto mechanic turned reluctant detective is back in Southborough resident Steve Ulfelder’s just-released second novel The Whole Lie. It looks like life doesn’t get any easier for Sax in this installment of the series:

Conway Sax, the no-nonsense auto mechanic with a knack for solving difficult problems for the Barnburners, the renegade AA group who saved his life, is back in The Whole Lie. And for once, he thinks normalcy is within reach. He’s opening a new garage, and he’s finally moved in with longtime girlfriend Charlene. The end of his parole is finally in sight. Then along comes Savannah Kane: smart, smoky, and a pusher of men’s buttons. Seven years ago, Conway helped her disappear—but not before they had a sizzling, knock-down-drag-out affair. Now she’s back with a shocking revelation: she’s the mother of a six-year-old boy. Savvy claims her son’s father is billionaire Bert Saginaw, but Conway knows she’s back for more than just a family reunion.

Saginaw wants to be Lieutenant Governor of Massachusetts. Savvy wants to get paid. Conway wants nothing to do with either of them. But a brutal murder leaves him no choice but to sort lies from truth–even though doing so may cost him his freedom, his lover, and his life.

Conway Sax was introduced in Ulfelder’s debut novel, Purgatory Chasm, which was released in paperback late last month. Purgatory Chasm was highly praised, and Ulfelder was nominated for a Mystery Writers of America Edgar Award in the Best First Novel category. Good stuff!

To celebrate the release of his second novel, Ulfelder will hold a launch party at Tatnuck Booksellers in Westborough on Thursday, May 10 from 7:00 to 8:30 pm. All are invited.

Purgatory Chasm and The Whole Lie are available at Tatnuck as well as Amazon and Barnes and Noble.

Thanks for this generous post, Susan! Let me just add that the launch party at Tatnuck Thursday is open house-style; folks should feel free to drop by anytime just to say hi. They won’t have to listen to me natter all evening!