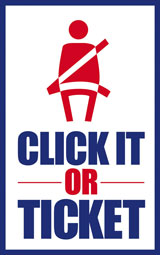 The Southborough Police Department is joining more than 120 other local departments, along with state police, in a high-visibility seat belt enforcement mobilization called Click It or Ticket. It’s part of a nationwide effort to save lives through increased safety belt use.

Now through June 3, thousands of extra state and local police will patrol the state’s streets and highways in a concerted effort to promote and enforce seat belt use. In Southborough, police have said they will issue citations to those operators who are not wearing seat belts while operating their motor vehicles. Law enforcement officers will also focus on other types of traffic safety violations, including impaired driving, distracted driving, speeding and aggressive driving.

The mobilization is being funded through the federal FFY 2012 Traffic Enforcement Grant Program. For more on the Click It or Ticket campaign, visit www.mass.gov/highwaysafety.