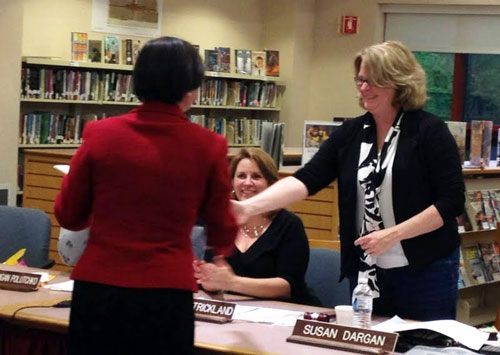 A professor and chairwoman of the sociology department at Framingham State University, Dargan announced back in January that she would not seek reelection to the K-8 committee due to increased responsibility at her job.

“Dr. Dargan’s contributions over the past nine years have been innumerable and have been greatly appreciated,” Superintendent Charles Gobron said at the school committee meeting on May 8.

Calling her a “tremendous asset,” Gobron thanked Dargan for her service. “You’ve been a voice of the schools,” he said.

Dargan’s fellow school committee members celebrated with a cake, and presented Dargan with a mahogany gavel.

“We will miss you terribly,” committee chairwoman Marybeth Strickland said.

Representative Carolyn Dykema also attended the meeting to thank Dargan for her work on behalf of Southborough schools and to present her with two citations recognizing her tenure.

Dargan admitted her work on the school committee “hasn’t always been easy,” but ultimately she said it has been rewarding. “It’s been a pleasure working in a district where people put children first.”