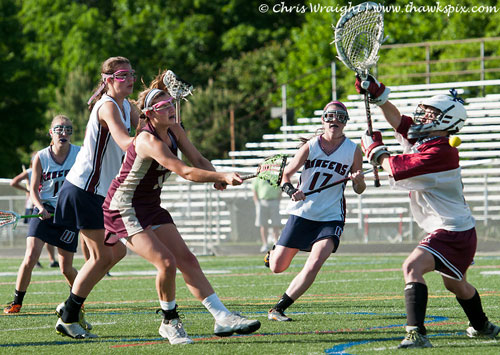 Above: Algonquin scores the winning goal over Westborough (photo by Chris Wraight)

The Algonquin girls lacrosse team ended the regular season this week with a dramatic, come-from-behind overtime victory over rival Westborough. Chris Wraight was at the game and sent in a recap of the action.

Earlier this season, Girls LAX defeated Westborough 8-7, the first time they’d beaten them in four years. For the season-ending re-match today in Westborough, the girls were down 3-10 at one point. However, they rallied and came back to tie the game 11-11 with 20 seconds left on a penalty shot by Carly O’Connell. They went into the first three minute ‘sudden victory’ OT, and noone was able to score. With 24.4 seconds remaining in the second OT, Carly O’Connell fed Laurie Finelli for the winning goal.

Senior Carly O’Connell from Southborough has been a standout on the team throughout the season. Early in the game against Westborough she reached the 500 career point milestone, only the fourth lacrosse player in state history to do so. Carly, who will be playing for the University of Oregon Ducks next year, has a state soccer championship and a Central Mass basketball title to her credit. Here’s hoping she can add a lacrosse championship to her resume. (For more, check out this profile of Carly the Worcester Telegram ran back in March.)

With the win over Westborough, both the Algonquin girls and boys lacrosse teams finished the regular season with 17-1 records. Both went undefeated in their 12 Mid-Wach A matches and are expected to be the top seeds in the upcoming Central Mass playoffs.

Take a look at some great photos of yesterday’s win over Westborough sent in by Chris Wraight (www.thawkspix.com). Click an image to enlarge.

That was a great game and it was exciting to see the girls rally and pull it off in the end.