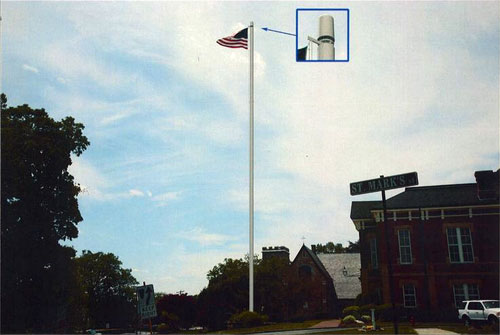 Above: A rendering from AT&T showing its proposal for a new flagpole (contributed)

As you may (or may not) know, the flagpole in front of the Town House is not a flagpole at all. It’s actually a cell tower disguised to look like a flagpole. The town worked out that clever arrangement with AT&T more than a decade ago when the old flagpole needed to be replaced. In exchange for using the pole to house wireless antennae, the town gets about $26K in rent each year.

When AT&T approached the town last August with a plan to replace the pole with one that would support new LTE antennae, the town balked at the proposal which featured what one selectman called a “butt-ugly” 28-inch pole. Most of you agreed with the selectman’s assessment.

Saying they “got the message,” AT&T went back to the drawing board and came up with a new design for a much slimmer 16-inch pole which they presented to the Board of Selectmen this week.

While selectmen praised AT&T for their efforts and for making “significant progress” on the design, they said they still weren’t sold. While the new design is actually slimmer at the base than the existing pole, which is 18 inches at the bottom and just over 9 inches at the top, selectmen objected to the fact that the proposed pole does not taper. They also felt the cylindrical cap at the top of the pole was too different than the traditional ball.

Attorney Edward D. Pare Jr. of Brown Rudnick LLP, who represents AT&T, told selectmen the pole cannot get any slimmer than 16 inches due to technical constraints, but said they might be able to make it wider at the base so it would taper more like a flagpole.

Selectman asked AT&T to evaluate other alternatives like placing a different pole in the Town House parking lot instead. And they asked for confirmation that the flag could be raised and lowered, an issue selectmen said would be a deal-breaker.

In exchange for replacing the existing pole with a new one, AT&T offered to increase its annual payment to the town to $40K.

“As a proud veteran in our town, anything that flies our flag needs to be incredibly respectful of that flag,” Selectman Dan Kolenda said.

The board agreed, saying the opinion of the veterans would weigh heavily on their decision.

“The only way I can sign off on it is if veterans are able to sign off on it,” Rooney said. “You need to convince me by convincing the veterans.”

The top cap isn’t that bad. The non-tapering doesn’t look great though. Maybe its should go to 20 at the bottom and taper to the 16, but that is still 78% bigger at the top. That’s still a lot. Needs a bigger flag than the picture shows too.

If it were my decision, I’d say they can keep the funny top, but get the top to 14″ tapered from 20″ and up the payment to 50k with a 3% increase per year and they got a deal.