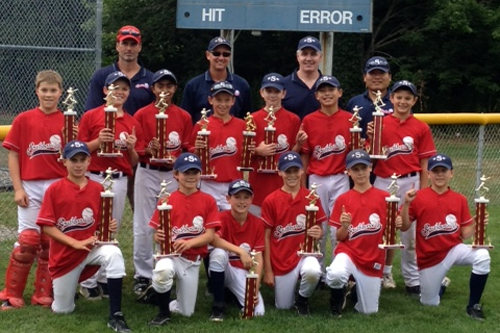 The District 11’s beat an undefeated Charlton team 5-0 to win the District 5 championship in Millbury last Saturday. They repeated as district champions going undefeated for a second year in row. The team outscored their final three opponents 22-1.

Coach Mike Morhardt said “The boys practiced hard all season on defense and it really showed in the playoffs. Last year we had the lowest ‘runs against’ of any team in the district and we were able to do that again.”

Supported by strong pitching and powerful hitting, all 13 boys made key contributions this summer. The results reflect a true team effort.

Congrats to the team!

congrats guys! didn’t some of these kids win last year, too?

Yes Katie, They won the district as 10 year olds!!!! It was a great way to spend part of the summer! Thank you to Mike, Bob, Fu and Mark for all your time spent with the boys.