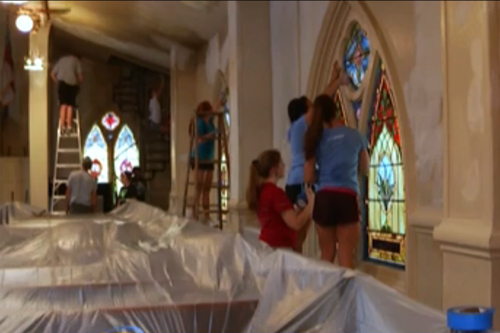 Above: Members of the Pilgrim Church Youth Group working to repair a Bronx church (via News 12 Long Island)

What do you get when 54 kids and adults from Pilgrim Church travel to New York for a week of hard work? For some parishioners in the Bronx, the answer might just be a miracle.

When the Pilgrim Church Youth Group took part in its annual mission trip last week, they set their sights on three churches and one church parsonage in the Bronx that were in need of some TLC. The cleaned, they scraped, they painted. And they left quite an impression.

Minister of Communication Debbie Herrick chronicled the group’s trip on the Pilgrim Church website (you can read her posts here). She said more than the physical labor, the mission was about strengthening relationships with each other and with the people they encountered.

“That’s how much this matters to the people we work with,” Herrick wrote. “Not just our presence, but the way we continue to try to get to know each other.”

In addition to work on the church buildings, the group also served somewhere in the neighborhood of 2,500 meals to those in need at the West Harlem Food Bank.

The theme for this year’s trip was “Got God?” Members of the youth group wore t-shirts with the message throughout the city and were asked each night to reflect on “the places they saw, heard, and experienced God.”

“What we’re learning each day is that our kids love to serve,” Herrick wrote. “Each night as we ask them to say where they ‘Got God?’ they talk about the strangers who said thank you, the people who saw our got god? tee-shirts and said, ‘Yes I do,’ and the folks we’re getting to know who say how much fun this is.”

By the end of the week, Herrick said the group had “painted 10 rooms, two sanctuaries (one much bigger than ours, one a little smaller) including the ceiling 20 feet up on one, a fellowship hall, an outside wall of a church, a fence, and quite a few arms and legs…We’ve fed thousands of hungry mouths, given hundreds, no, maybe thousands of hugs, and when 54 of us go clapping through the subway, we’re the latest street performers to take over the Big Apple.”

They also created memories they’ll carry with them back home to Southborough.

“The homeless man we fed most nights this week, the child we hugged each day, the older lady who made the best carrot cake in the world, the church men who painted with us every day, and the relationships with each other,” are what Herrick said they will remember most.

The youth group holds events throughout the year to raise money for their annual mission. Next year’s trip will be to Chicago.

For video of youth group members repairing St. Edmund’s Episcopal Church in the Bronx, check out this story by News 12 Long Island.

This mission trip was easily one of the best, most important things I’ve ever done. I’ll definitely go again next year!