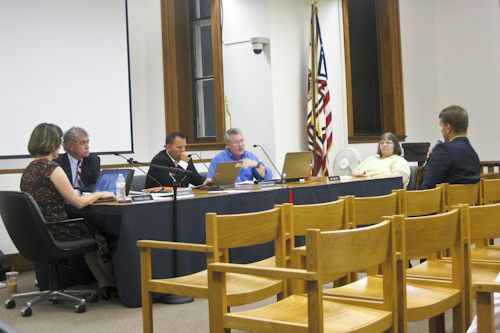 Above: The Board of Selectmen interview a candidate for town administrator

The Board of Selectmen last night interviewed three candidates for the position of town administrator, but said they wanted to “sleep on it” before making a decision. Selectmen are expected to vote on the candidates at a meeting on Wednesday at 7:30 am.

The board will have plenty to sleep on when it comes to the candidates. All told the interviews lasted nearly 3-1/2 hours. The topics covered ranged from budgeting to leadership styles to relationships with the school district to trash disposal.

Prior to sitting before selectmen last night, each of the candidates spent time last week meeting with town department heads. Several of the department heads, along with members of the Town Administrator Screening Committee, were at the Town House to listen in to last night’s interviews.

The three finalists were Leon Gaumond, West Boylston Town Administrator; Mark Purple, Interim Ashland Town Manager; and Anita Scheipers, Assistant Town Administrator in Lincoln. You can read more about the three in this article by the Metrowest Daily News.

At the start of the interviews, Board of Selectmen Chairman John Rooney said hiring a new town administrator was “an exciting opportunity to catch up with the modern municipal world.”

Selectmen at several points called the position a “strong town administrator,” referencing their decision earlier this year to expand the power of the town administrator. Rooney said he was looking for someone who could also be a town manager should the town decide to go that route.

“We’re interviewing someone (who will be here) for the next 10 to 15 years,” Rooney said. “That’s the vision I have.”