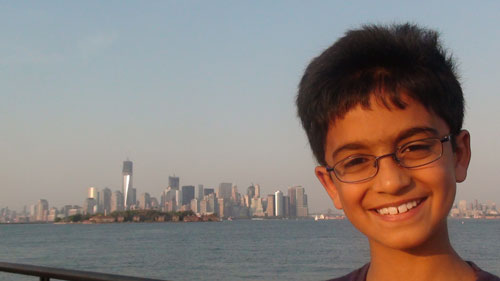 Above: Kaasinath Balagurnath on a recent trip to New York City (contributed photo)

[Ed note: This is the latest in the Doing Good series which features stories of Southborough residents who are doing their part to help the causes they hold near and dear.]

Trottier sixth grader Kaasinath Balagurnath wants to make a difference in the fight against world hunger. While a fifth grader at Neary, Kaasinath created a team on the UN-sponsored website freerice.com, where he and his fellow students answered trivia questions to earn donations of rice for those in need. At last check, Kaasinath and his team had donated nearly 100,000 grains of rice.

But it isn’t just hunger abroad that concerns Kaasinath. He’s also focused on hunger right here at home. Kaasinath recently wrote an article on hunger for a student journalism contest. In it he uses Southborough as an example of how pervasive the problem of hunger is. Take a look at Kaasinath’s article below. 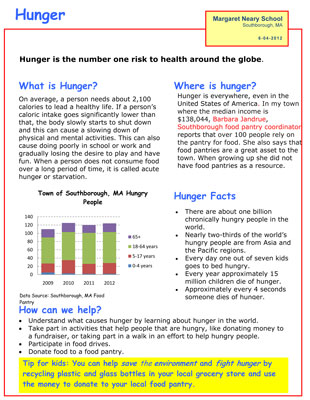 You can join Kaasinath in his fight against world hunger by encouraging your kids to sign up for his team on freerice.com.

A great paper, well-written and a very worthy cause. Kaasinath, you (and your parents) should be very proud!

The Southborough Rotary Club is sponsoring a 5K Walk/Run during the annual Heritage Day Weekend. It is on Sunday October 7th. Proceeds from the race each year go to the Southborough Food Pantry. We would like to invite you to participate in the race activities as a advocate for the Food Pantry. If you are interested please contact me (carl.guyer@gmail.com), I commend your initiative and thoughtfulness.

Kaasinath is such an amazing boy. He asked a lot of questions and really did his homework. He has passion and understanding far beyond his years. I thoroughly enjoyed his visit to the pantry. Thanks Kaasinath. You’re an awesome kid!!