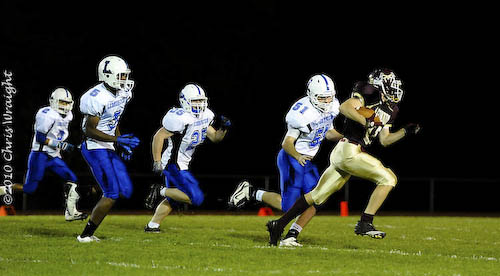 Above: Algonquin hopes to improve on last year’s season, starting with it’s opener tonight at home (photo by Chris Wraight)

Algonquin football begins their season tonight with a new coach and new hopes. The school hasn’t had a wining football season since 1997, but they’re banking on Assumption College grad and former Wachusett Regional offensive coordinator Justin McKay to turn things around.

McKay, who was hired last March, told the Community Advocate his number one priority is to create a wining team, and one that functions like a family. “I know how much the game of football influences a student’s life,” McKay said. “From teaching them life lessons to providing lifelong memories and friendships, I wanted to provide the students of ARHS a positive experience that they would be able to learn and grow from. I see the football field as an extension of the classroom and know how much impact it can have on them.”

Algonquin plays its first game of the season tonight with a big game against Burncoat at Foley Stadium in Worcester. Kick-off is at 7:00 pm.

Assabet made it into the Division VI superbowl last year, so no doubt they’ll be looking to repeat a successful season this year, starting with a home game against Millbury at 7:00 pm.

The young men played well last night at Foley Stadium and won 26-0. They were well coached by Coach McKay and his staff. Winning season or not, the difference in a man with professionalism in mind can place the mentality of winning and producing good young men which is desperately needed in society today. Best of luck toady at ARHS as the JV play at 10am. Should be a good game, come on out.

Couldn’t agree more with Mike’s comment! The fan support from the ARHS student body was remarkable, too. I hope this is just a glimpse of what is to be a wonderful season for a great bunch of guys who have worked so hard to play the game.