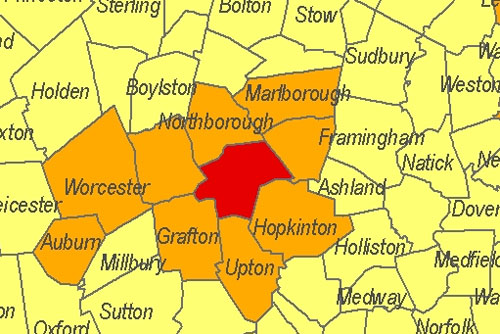 Above: A map showing the risk of mosquito-borne illness in our area. Yellow is “moderate,” orange is “high,” and red is “critical.” (via Mass Department of Public Health)

With the threat level for mosquito-borne illness now at “high” in Southborough and the surrounding area, many neighboring towns have made the decision to cancel evening activities. Southborough may follow suit.

Northborough health officials announced yesterday that evening activities in their town would be canceled. Shrewsbury did the same. The decision in Northborough impacts this weekend’s planned Applefest barbecue and fireworks display. It also impacts Algonquin sports.

Any Algonquin sporting event scheduled to take place after 6:00 pm will be rescheduled to the daytime, until after the first hard frost kills off the mosquito population. Rescheduling will mostly impact Algonquin football and soccer.

According to the Worcester Telegram, Southborough Public Health Director Paul Pisinski planned on Monday to send out an advisory to the schools and Recreation Department recommending evening activities in our town be canceled, as well. From what I can tell, that recommendation has not yet been made, but the Board of Health is expected to discuss the issue at their meeting on Wednesday.

Director of Recreation Doreen Ferguson said in the meantime she has requested spraying of several town recreation areas, ones that were not included in the spraying conducted last night in the Newton Street area.

With the recent detection of mosquitoes infected with the West Nile virus in Southborough, along with West Nile and EEE discoveries in neighboring towns, state officials say the chance of human infection in our area is “high,” up from a rating of “moderate” in August. In Westborough the risk is considered “critical.”

I’ll keep you posted if I hear anything about the fate of evening activities in Southborough. In the meantime, tell me, has the mosquito threat caused you to change your routine? Do you let your kids out during peak mosquito hours? Are you doing less outside than you would normally? Or is it business as usual at your house – just with a bit more bug spray? Let us know in the comments.

Bug spray with DEET (or permethrin for clothing only) is a good idea, but changing your outdoor routine to avoid mosquito peak times (dawn & esp dusk) is the best advice. Check your window screens (tight & no holes), keep outdoor lights near doorways off if possible (they can attract mosquitoes, and when you open the door they may come in) and eliminate standing water in containers.

It has been business as usual with a bit more bug spray. And a bit more caution if the yard seems buggy. But now that’s we’re at “high” – I’m thinking twice.