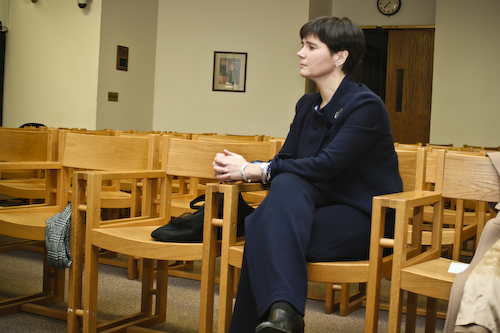 Above: Representative Carolyn Dykema attending a Board of Selectmen meeting last year

State Representative Carolyn Dykema will hold office hours at Mauro’s Cafe (2 Main Street) on Friday, and she invites Southborough residents to stop by. It’s your chance to meet Dykema and discuss anything that might be on your mind. Dykema will be at Mauro’s from 8:00 to 9:00 am.

If you’re not able to make it on Friday and you have something to discuss with the representative, you can contact her office at (617) 722-2210 or email her aide at leah.robins@mahouse.gov to set up a personal appointment.

Now she holds office hours? Most Representatives hold them weekly. Mr. Lamb has promised weekly, so that is why she is now doing these. Her last office hours were in May.

Honestly, Carolyn Dykema is tremendously accessible. Only the Marty Lamb campaign thinks otherwise, and really they’re only promising one hour a week. Carolyn spends more time in some days than Marty is promising for a month.

Honestly, Mr. Roney, I’m not sure you want to understand me. I’ll parallel this with a college counselor. The last thing you want is to talk about your issues at some event in the middle of a field with a lot of distraction around you. You’d like a one on one sit down, not just be worked-in during some other event.

These issues can require some privacy and attention. What’s so difficult ? Every public office holder goes to a gazillion different things, but they are there for other purposes, not to squeeze in a constituent on the side.

I’ve looked at what both sides are saying, and you are talking apples and oranges. You are mixing what Mr. Lamb says about office hours with events Ms. Dykema goes to. Apples to apples is office hours to office hours. As I said, elected people go to a gazillion things, and what Mr. Lamb is saying is he’ll provide much more dedicated one on one time in office hours, which Ms. Dykema does not do. It’s been done last January and last May. So, when Mr. Lamb says he’ll be in all towns every week, that’s a HUGE difference in accessibility. Every week in all towns is a lot more that once in 4 months. He is saying he’ll do that along with all the other responsibilities of events.

It’s a matter of increasing the dedicated one one one office hour time. That’s the topic.

Two years ago I was undertaking a difficult battle and was searching for advocacy. I turned to both Carolyn Dykema and Jamie Eldridge. They were there for me when I needed them. Both they and their staff met with me, heard my concerns and made calls to the state house on my behalf. Have you ever called Ms. Dykema’s office to request one-on-one time with her and been refused? Do you know anyone who has been refused one-on-one time with Ms. Dykema? I do not. You are barking up the wrong partisan tree with this one young lady. Ms. Dykema is one of the most accessible politicians/representatives we have ever had.

Mr. Rooney below. I appreciate your perspective on this subject as a community leader on the front line on these kind of issues.

Yes, I do hear about it from people whose issues are not addressed and know someone who lives in Hopkinton who had an immigration issue that she didn’t help with. That person is away and will return on the 26th. I’ll ask and post here.

I’ll bookmark the link to this blog in case this disappears from the board and can get back to it.

Immigration issues are federal, not state. State reps woudn’t be able to help your friend out much with an immigration issue. Your friend should contact one of our federal legislators. The US congressional rep for Hopkinton (and Southborough) is Jim McGovern (http://mcgovern.house.gov/the-3rd-district/). She could also contact either of our two Senators, Scott Brown (http://www.scottbrown.senate.gov) or John Kerry (http://www.kerry.senate.gov/).

Ms. Reeves, You have every right to disagree with Representative Dykema’s policies and with her efforts to secure reelection. However, your post about her commitment and passion for our town reflects an utter lack of knowledge about her representative activities. .

I would suggest you spend some time in our town and perhaps check the reliability of your sources. If you did, you would immediately discover that Representative Dykema is involved with all aspects of our local government. She regularly attends selectman and economic development meetings. She is involved with meetings with non profit institutions and public safety departments. She participates in meetings at the library, at the senior center, and with local agricultural concerns. She meets regularly with veterans and our town’s youth and is a force when emergency management meetings are necessary. This is just a small sampling of her “office hours.”

I am fortunate to have the privilege of being Chairman of the Board of Selectmen in Southborough. In terms of your candidate’s visibility and commitment, I have not seen much of Mr. Lamb. In fact, I have never met Mr. Lamb nor would I recognize him if he was standing next to me.

I must say you lose all credibility venturing down a road that questions her dedication to our town.

I’m busy with college, but I do spend time in town and if I can get there, I’ll try to go to the meet and greet on Sunday afternoon nearby.

The media are my sources and I fully understand how the media can be unreliable. Nobody my age puts any trust in the media, because instead of reporting the news, they often editorialize. This is a big topic in political science and journalism classes. There are countless examples we look at and research and discuss.

So, look at it from my perspective, if you can. You mention some meetings. Elected officials go to meetings. They are on certain committees as well and are focused in certain areas. They naturally need to keep up with local issues. This is not one on one speaking with a constituent about an immigration issue, for example. Where’s the private time to discuss something personal and important. Everybody’s issues don’t fall into the categories of a bunch of department meetings, and most citizens don’t go to those meetings anyway.

Now when it comes to a candidate, there is a certain protocol that our Professor discussed, and that is, candidates can’t just show up at these development, department, and institution meetings. It would be out of place and out of form. You can’t just barge in to some of these. In other words, “you can’t politicize it”. So, it really isn’t their place to go to a number of these. How can a candidate interact and engage. These meetings have their own agendas.

I know from friends who are big on the environment that there was a big issue in Holliston about zoning on Bullard Farm, and there are people I know there who tell me they are glad Mr. Lamb came out strongly for them. These are Democrat friends who said they saw him at every planning board meeting and every special meeting on this issue. In fact, the whole town turned out. It was a big deal. People were worried about this commercial zoning and health impacts.

These are the kinds of things, candidates can do, because they are residents of the town as well. My Dad met Mr. Lamb in Southborough while he was door knocking. He also has seen him with a group of people at the transfer station or near the library on some Saturday’s. My roommate met him at the local election candidates’ forum in May. You would have been there. He was there, too. So, I’m surprised you say you don’t know. The news had him at Summer Nights. SouthboroughNews.com has pics posted of him now at a festival nearby last weekend. This has happened other times. The literature my roommate got at her home this summer has his face on it.

So, for someone in your position as a Chair of a Board, who would naturally read news online and keep up, I can’t possibly fathom how you could miss all this.

Thanks Mr. Chase, but the immigration issue is something local that a small business owner needed help with. I’ll ask for sure.

Margaret im with you.

So far, no substantiation of any lack of responsiveness on Rep. Dykema’s part, just a vague charge.