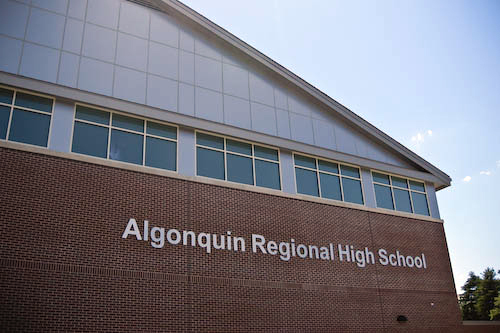 The Department of Education released the state’s MCAS scores for 2012 yesterday. You’ll all be happy to hear Algonquin performed phenomenally well. In the 10th grade MCAS, Algonquin had the most students pass of any school to take the exam. Of the 375 students who took the English test and the 376 who took the math test, not a single one failed.

Not only did they pass, they did really well. According to the state numbers, an impressive 100% scored Proficient or higher* on the 10th grade English test. In math, 96% scored Proficient or higher, and 92% did the same in science. According to a ranking on Boston.com, Algonquin tied with a handful of other schools as the top in the state for English, and came in 13th for math and 25th in science.

The English and math scores are an increase over last year when 96% of 10th graders scored Proficiency or higher in English and 92% did so in math. The results of the Science MCAS were largely unchanged (91% in 2011 compared to 92% in 2012).

Algonquin principal Tom Mead told the Metrowest Daily News he was pleased with the results. “It continues our steady climb,” Mead said. “I’m really grateful for our staff – they’ve adapted their curriculum and adjusted to the demands of the MCAS, and continue to do so.”

Results in Southborough’s K-8 schools were a bit more varied, but on the whole numbers improved. You can take a look at the chart below and draw your own conclusions, but on average, 2012 scores were higher than 2011 scores. Note the particularly strong showing by last year’s 4th grade class. 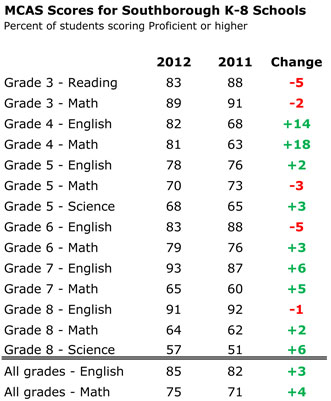 You can dig more into the results on the Department of Education website. How do you think our districts did? Anything stand out to you? Share your thoughts in the comments. The discussion on MCAS began yesterday here on the blog. You can see what other readers had to say already over on this post.

* While the state reports 100% of Algonquin students scored Proficient or Advanced in English, they also say 1% of the test-takers came in at Needs Improvement. Statistics works in mysterious ways.