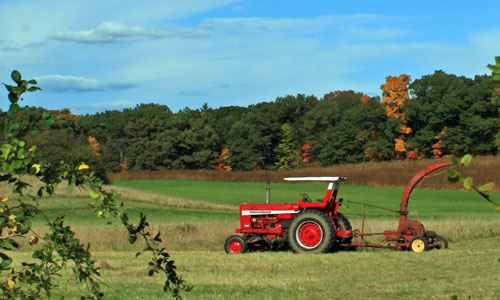 Above: A tractor at Chestnut Hill Farm

Earlier this summer, residents living near Chestnut Hill Farm complained to the Board of Health about a strong odor of manure coming from the farm. The board had little sympathy at the time, saying the odor was not a public health risk, but Public Health Director Paul Pisinski said recently the two sides have worked together to reach a compromise.

Pisinski told the Board of Health earlier this month that the odor issue dates back at least five or six years. “The odors get worse when the farmer spreads manure, and neighbors have complained,” he said. “It’s an awful odor, but it’s not harmful.”

While Pisinski said there was no action required from a public health standpoint, representatives from the town helped connect one of the neighbors with the Trustees of Reservations, the land trust that manages Chestnut Hill. A representative from the organization visited the farm and was “aghast” at the smell, Pisinski said.

The Trustees worked with the farmer who leases the land for agricultural purposes to remove his stockpile of chicken manure. The farmer has agreed to use sheep or cow manure in the future, which apparently is less stinky than chicken manure.

Ah, the nuances of manure.

Susan, that last line cracked me up. : )

maybe they could get the farmer to switch to dog poop, it seems to be piling up in the storm drains

As a teenager I mucked out chicken barns. I can attest to the difference. I have stood kneed deep in cesspools and cow manure pits that smelled much better.

There is a reason, as I learned. Birds and reptiles don’t drink a lot of water. Unlike mammals, they dispose of ammonia (NH3) in the form of Uric Acid rather than Urea/Urine which is mostly water. That is the reason bird “poop” it white, it is mostly Uric Acid. This breaks down to ammonia which is often the cause of the nasty smell.

That being said chicken manure is excellent fertilizer much higher in nitrogen than cow/horse/ruminant poop.

We wax eloquent about our rural heritage but the reality is that when we actually rub up against the reality of farming we don’t like what we see and would like to retreat to the safe confines of suburbia.

Al,
Have you ever thought of going on Jeopardy?
You are a wealth of information!