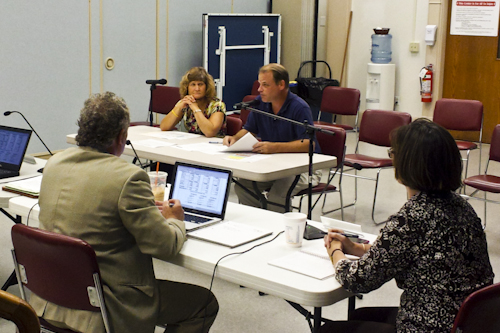 With less free cash on hand this year, and without some of the one-time money the town has used to fund budgets in the past, Southborough Finance Director Brian Ballantine told selectmen last week there’s little chance of avoiding a tax increase next year.

“It’s going to be another tight year,” Ballantine said.

After running the numbers, Ballantine told selectmen taxpayers are looking at a 1.65% property tax increase even if budgets are level-funded next year. That’s because the town’s free cash levels have decreased by about $300K since last year, and one-time sources of money like the overlay reserve fund are essentially tapped out.

Chairman John Rooney said planning on zero budget increases for next year is unrealistic given the town’s contractural obligations. Four town union contracts, including police, fire, and clerical, are up for renegotiation this year. Teachers have one more year remaining on their contracts.

Ballantine said the challenge this year will be coming in under an amount that would trigger a Proposition 2-1/2 override vote. He projected if all town and school budgets increase by 2.5%, it will bring the budget very close to the cap. A budget increase of that level would translate to a tax increase of about 4.21%, or $360 annually for the average Southborough homeowner.

Selectman Dan Kolenda said everything should be done to avoid an override vote, which he predicted would not pass given the fiscal mood of taxpayers.

While asking for level-service numbers, selectmen left the door open for departments like police and the schools who may think they are currently under-funded to argue for increased services, but warned it would take some convincing.

“Departments will have to come up with a very strong argument if they need to go above level service,” Selectman Bill Boland said.

There are so many locations in this country in which a few elected officials can decide to increase the real estate tax that, for those of you who may be unaware of our process here, your tax can only be set by a vote of citizens at Town Meeting. Taxes cannot be increased, or even maintained at their current level, without majority support of citizens. Town officials are accustomed to having voter support for tax increases, which is why the tone of some of the statements in this story might be confusing to a new voter, or someone who has not participated in the process. There is no such thing as any “unavoidable” tax increase. There will only be a tax increase if voters decide to support it.

Even those who know how the system works in theory may not have considered how exquisitely sensitive it is to small amounts of political effort. In a typical year, if about 2% of the Town’s registered voters showed up at Town Meeting with the intention of having no tax increase, there would be none. Conversely that amount in support of tax increase will ensure one. The notion that the average citizen here is powerless is emphatically incorrect.

(Do not read into this statement that I have any preference at this point. I have none, yet.)

A fair and valid point. For the record, Mr. Ballantine did not at any point use the word “unavoidable” – that was my word choice. Perhaps not the best one in retrospect.

Well said. But how to effect a “no tax increase” with “no service decrease” is a tough assignment…

Mr. Butler, The tone of our meeting last week was the unavoidability of recommended future tax increases in order to maintain the expected level of municipal services.

But Mr. Ford brings up a very valid point, and results in the question where will we as a town choose to go? I venture into this discussion with every expectation that by doing so I will likely make more enemies than friends. Although politically unpopular and therefore historically left unstated, we as a town really need to acknowledge current day economic reality. I write based upon one person’s observations of where we are and profess not to speak for anyone beyond myself.

It would require all of us to blink at reality to minimize the enormous difficulty we encounter in our effort to resolve competing claims by residents to a limited municipal treasury. We face pressure from residents to deliver infrastructure and services, but have limited, often declining, resources to achieve these goals. We all receive various types of services from the town: we attend public schools, walk and drive the streets, drink clean water, enjoy the protection of the police and fire departments, look at the beauty of open space, and so on. The mantra “do more with less” sounds good, but the reality is that we have thus far been unable to cut spending or raise revenues sufficiently to meet residential expectations.

When our town has been unable to generate sufficient revenue among property taxes, state aid and local receipts to cover our appropriations, we have typically reverted to using non-recurring revenue such as free cash, stabilization, and overlay surplus, or other one-time revenue sources. Through the use of free cash and one-time revenues, the town has been able to absorb the rising costs of health insurance, collective bargaining increases and normal government operating cost increases without resorting to an override. The inevitable result is a structural gap (I believe it was Mr. Rossen that correctly pointed out at town meeting that my use of the term “deficit spending” was inaccurate) caused when our town’s recurring revenues cannot cover recurring expenditures.

Looking ahead, the town possesses neither the revenue potential from new sources nor reserve capacity to continue on its present course. By using non-recurring revenue to fund operations, we have effectively postponed making difficult decisions on service and taxation levels. I do not know whether this is a good or a bad thing. We are at (or very close to) the point when hard decisions need to be made on how to allocate and balance limited resources. Decisions will need to be made that may not be popular, but necessary for financial stability.

This is the fiscal reality I have come to understand in our town. As a community we need to all get on the same page, reject efforts to adopt an “us versus them” mentality, and participate in public spending decisions so that everyone has an influence in prioritizing town spending and the allocation of public resources. To maintain the high quality of our public education, excellent public safety and public works service delivery, a senior center and recreation department second to none, as well as a long list of additional services, we need to be open to changes in the way we do business, and embrace controlled and well-thought-out efforts to expand the town’s tax base.

Town meeting is a powerful body and one that from time to time needs to be shaken out of its apathetic slumber. This is one of those times that requires and demands expanded involvement.