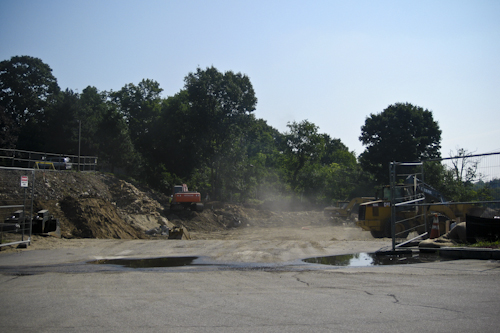 Above: Construction on the new Cumberland Farms began this summer

The new Cumberland Farms on Route 9 westbound just before Route 495 may look close to done, but they won’t be able to open their doors just yet. Town Building Inspector David Gusmini issued a cease and desist order in late September because three retaining walls on the site were not built according to the plans approved by the town.

The (Zoning Board of Appeals) in April approved two setback variances to allow the business to raze and nearly double the size of its convenience store, install a canopy over its gas station and add four more gas pumps.

In an Oct. 30 letter to Cumberland Farm, Gusmini wrote that the company would need to seek additional approval for the walls since they were built in a different area than the ZBA had approved.

Gusmini also wrote that a design of the site submitted at his request on Oct. 23 “is significantly different” than plans approved by the Planning Board in July.

Gusmini wrote that each wall would need a setback variance, and in the cease and desist order also barred the company from continuing construction of a septic system on the site.

The ZBA is scheduled to discuss the matter at their meeting on Wednesday, which is open to the public. You can read more about the project in this article by the MWDN.

I find this really troubling. I am glad that the building inspector is NOT just letting them slide on building something very different from what was approved. This done way too often in construction and is a way around town regulations that are in place for a reason.. Regardless of cost, they should rip it out and build what was approved. Their (arrogant) “mistake” does not mean that our ZBA or Planning Board should compromise or let them off the hook.

I would be interested in when this issue will be coming before both boards.