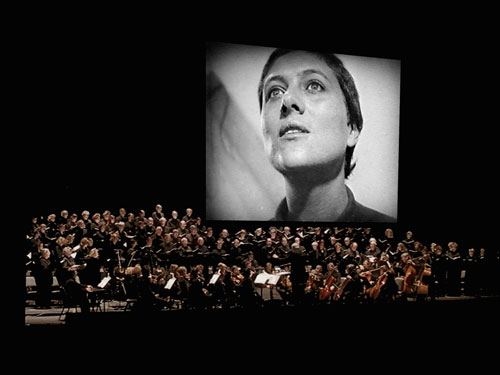 On Sunday, the Assabet Valley Mastersingers, a choral group with members from Southborough, Northborough, Marlborough, Hudson, Shrewsbury, Westborough and surrounding communities, will present their 100th concert performance. ‘Voices of Light: The Passion of Joan of Arc’ will take place at 3:30 pm at the Class of 1945 Hall at St. Mark’s. Here are more details.

Voices of Light: The Passion of Joan of Arc
Presented by the Assabet Valley Mastersingers

Voices of Light merges the legendary silent film masterpiece, The Passion of Joan of Arc, widely considered to be one of the greatest films ever made, with a live performance of a ravishing score by award-winning composer Richard Einhorn. An incredibly moving composition for solo voices, chorus and orchestra, Voices of Light has been hailed as “a triumph” (Los Angeles Times) and “an overwhelming experience” (Chicago Tribune).

Introduction by John J. Michalczyk
Boston College Fine Arts Professor John Michalczyk, director of the university’s Film Studies Program, is a filmmaker whose documentaries have focused on social justice, exploring issues of discrimination, hatred, war and peace. Starting at 2:40 pm, immediately before the concert, Professor Michalczyk will give a presentation entitled “Carl Dreyer’s Passion of Joan of Arc: An Intimate, Psychological Portrait of a Martyr”. Your concert ticket will grant you entry to his talk as well as the film and concert.

Demand for tickets has been high, so if you want to attend, best to get yours in advance. Tickets are being sold at a number of local establishments – see the list here – but I recommend you call first to make sure they still have tickets to sell. The only place in Southborough that had tickets was English Garden Florist, but I’m told they’re sold out.

Also note that due to high demand, you must make a reservation for any children wishing to attend the performance. More information on the Mastersingers’ website (www.avmsingers.org/ticketinfo.html).