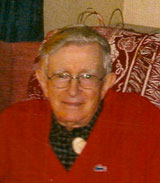 Dr. Samuel P. “Pen” Cowardin III, 91, of Concord, formerly of Southborough, died Saturday, February 23, 2013 at the Rivercrest Nursing Home in Concord. He was the husband for 51 years of Marjorie (Cooley) Cowardin.

He was born in Richmond, VA in 1921 to the late Dr. Samuel P. Cowardin, Jr. and Ruth (Brown) Cowardin. Pen graduated from the Lebanon School (now Darrow) in New York and received his AB from Harvard.

After service in the 102nd infantry division during World War II Pen completed his MA and PhD degrees in fine arts at Harvard. He was elected to Phi Beta Kappa and received an Edward Bacon traveling fellowship from Harvard and a Fulbright Fellowship to study in Italy.

Pen became a professor and department chair of art history at Clark University. After 36 years of service he retired in 1987.

He was a gifted historical marine artist who painted ships of the early steamship era. Pen exhibited at the Concord Art Association, St. Marks School in Southborough, and other locations. Shortly before his death he donated his oil painting of the RMS Lusitania to Emmanuel Church in Boston.
In addition to his wife, Marjorie, he is survived by his sister Mrs. Camilla Greene of New Orleans, LA; his brother Dr. Lewis Cowardin and his wife, Eustis of Jamestown, ND and many nieces and nephews.

A memorial service is planned for a later date. Donations may be made to The Darrow School, 110 Darrow Road, New Lebanon, NY 12125.

Arrangements are under the care of the Dee Funeral Home of Concord. To share a remembrance in Pen’s guest book, visit www.deefuneralhome.com.