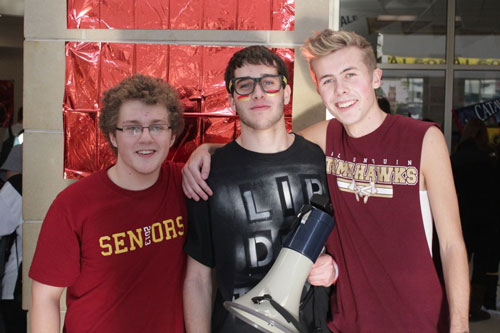 For Algonquin seniors Giles Ober of Southborough and Samuel Huddart and Nic Zanghi of Northborough, it wasn’t your average homework assignment. What began as an idea in a marketing research class, turned into a project that took five months to complete and involved nearly the entire school. It’s a project the three students hope will earn them not just a good grade, but one they hope will leave a lasting impression on the Algonquin community.

The project is a video, an ode to Algonquin in the form of a lip dub to the song “Good Time” by Owl City and Carly Rae Jepsen, that Ober says is intended to promote school spirit. The students posted the video on YouTube yesterday, and as of this afternoon it had already garnered nearly 8,000 views.

“Our goal is to leave behind a legacy for new students to come, and so far we are on the right track,” Ober said via email.

In the video, the camera follows students walking backwards through the halls of the school lip-syncing. Other students line the halls, dancing, cheering, and carrying signs. The video promotes Algonquin clubs, extracurricular activities, and sports teams, and there is no shortage of school spirit on display.

Directed and produced by Ober, Huddart, and Zanghi, the video was filmed over two separate days, one in December and one in January. The three promoted the project through Twitter, Facebook, and video blogs along with more old-fashioned methods like posters and school announcements. More than 950 students showed up for the filming.

The video was filmed and edited by 2011 Algonquin graduate Mike Davis.

Ober, Zanghi, and Huddart will present the video at the state DECA conference in Boston next week, where they hope to qualify for the national conference in Anaheim in May. DECA is a national high school and college organization that aims to prepare emerging leaders and entrepreneurs for careers in marketing, finance, hospitality and management.

Ober said he plans to attend Babson College next year, where he will also play lacrosse. Zanghi and Huddart are still undecided on their post-graduation plans.

Have a look at the truly excellent video below, and soak up some of the school spirit for yourself. (Click here to view on YouTube.)

I watched the video when I first heard about it. Awesome work!

Great job on this video! It’s on my Facebook page for other ARHS Alumni to see! Definitely captured the spirit of ARHS!

This video is incredible! Awesome job guys. I watched it with my 7 + 9 yo and they both said they can’t wait to go to Algonquin :)

NO WAY!!!! That is FANTASTIC! Great job everyone!

So fun to watch. They did a great job.
Makes you want to be young again! (almost…..)

Wow!!! Fabulous! I am speechless..incredible job! I always have been and continue to be so very proud of Algonquin students and this shows that pride is not unfounded. All those who participated should take a huge bow!

The video has been pulled offline because of some copyright claim! How sad that something so creative can get shut down like that. Not sure how such a creative and often seen video can be judged as some kind of threat to a music company’s profits. Tough lesson for these kids to learn..

This is sad that it was pulled offline. I watched it with the other night and got goose bumps knowing my girls attend this awesome high school….so much spirit! Great job boys…sounds like a fun class/teacher!