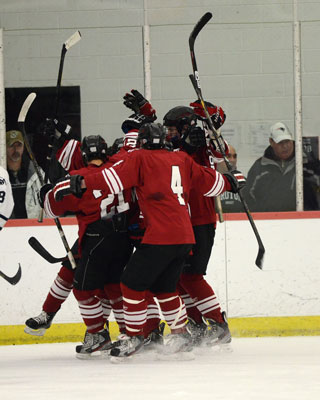 Above: St. Mark’s boys hockey celebrated a big win over Groton to cap off their season
(contributed photo)

St. Mark’s wrapped up its winter sports season last month with five wins over rival Groton. The school sent along this recap of the victories:

On February 23, St. Mark’s traveled to Groton to play six games, and the Lions defeated the Zebras in five of them. During the winter season, St. Mark’s went 8-6-1 against Groton.

The most exciting win came fromVarsity boys’ ice hockey, scoring two goals in the final minute of play to take home a 4-3 win. The Lions defeated Groton in an earlier game this season. Earlier in the month, 3rds boys’ basketball, JV girls’ hockey, and 3rds girls’ squash all registered victories over Groton to cap their respective winning campaigns.