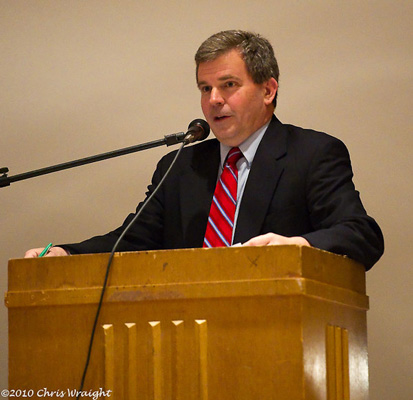 Above: Town Moderator David Coombs presiding over a past Town Meeting (photo by Chris Wraight)

It’s not uncommon for Southborough’s Annual Town Meeting to stretch into a second or even third night as voters consider budgets, bylaw changes, and more. But this year, Town Moderator David Coombs said things might be different.

Calling it “one of the most unusual town meetings I’ve seen,” Coombs told those gathered at a pre-Town Meeting last night that there are fewer articles than normal this year. Add to that the fact that not many of the articles appear to be controversial, and Combs said he’s going to make every effort to wrap up all the town’s business in one evening.

Coombs’ desire to get everything done in a single sitting is a practical one. Attendance at the second night of Town Meeting is historically lower than that on the first night, and if there are only a handful of non-controversial articles that get pushed to a second night, Coombs said he is concerned voters will not bother to show up. A quorum of 100 is needed to start the meeting.

Coombs joined the Board of Selectmen in encouraging residents to show up and participate next week. “Town Meeting is the people’s chance to speak,” Coombs said. “[The people who attend] are the people who control what happens in town…It’s the most direct form of representation you’ll ever see.”

Town Meeting starts on Monday, April 8 at 7:00 pm at the Trottier Middle School auditorium. If a second night is needed, the meeting will reconvene on Tuesday, March 9 at 7:30 pm.

Note about “wrapping up.” The Town Meeting business is not complete until there’s a vote to adjourn. If there’s not a quorum, say, Tuesday night, we couldn’t adjourn and would have to keep calling meetings until…
“Not complete” means we wouldn’t be able to spend any of the money for FY14 until there was an official adjournment. Nothing else would go into effect until same…
So be sure to STAY long enough…