[This is the latest in an occasional series by Beth Melo, a Southborough mom who loves to read to her kids. This post was originally published on the Southborough Library website, and has been reposted here with permission. For more of Beth’s book recommendations, click here.]

In honor of April Fools Day, I thought it would be fun to write about children’s books that make me laugh or make my children laugh without making me cringe. 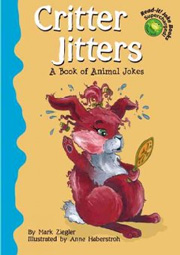 Joke and Riddle books – WARNING: If your child hasn’t started trying to tell jokes (especially of the knock knock variety) introducing them to joke books can be dangerous. In the early stages of joke telling kids tend to share a string of humdingers like “Knock Knock – Who’s There? – Binky – Binky Who? – Binky wooshee badaboo!” However, if you’re child is already telling (or past telling) priceless jokes like that, joke books can be a good way to help them understand and tell real jokes. The jokes in these books aren’t all great, but most of them are either funny or not terribly annoying. (Certainly better than my son’s “How did the pig cross the road? He snorted at the cars!”):

As always, if you have any favorites to share please post below. If you have any questions for me, feel free to e-mail becmelo@yahoo.com.

*These books aren’t in the children’s room collection but are available through interlibrary loan.