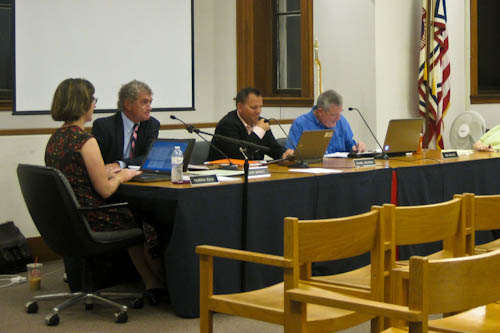 Above: The Board of Selectmen may soon need a bigger table

Southborough’s Board of Selectmen has been a 3-member board since the Colonial era. Chairman John Rooney argued last night it was time to bring the board into modern times, and Town Meeting agreed, voting overwhelmingly to increase the size of the board to five.

“We exist in a changed community, in a modern day that is trying to hold on to a colonial style of government that is no longer able to meet the needs of this town,” Rooney told a relatively sparse crowd at Town Meeting last night.

Former board members Roger Challen and Bonnie Phaneuf spoke in support of the change, but notably, the two other sitting selectmen, Bill Boland and Dan Kolenda, opposed it.

Citing this year’s election with only one contested race as an example, Boland said he and Kolenda were concerned there would not be enough interested residents to fill the seats if the board increased to five. “We don’t seem to be attracting people to run for office,” he said.

But Rooney argued that thanks to decisions Town Meeting made earlier in the evening to grant more authority to Southborough’s town administrator – the two articles aimed at creating a so-called strong town administrator passed nearly unanimously – the role of selectmen will evolve from one with a day-to-day focus to one that becomes more forward-thinking.

“It’s a new job with new responsibilities,” Rooney said, one that he believes will encourage more residents to run.

Advisory Board member John Butler, speaking for himself and not the board, agreed urging Town Meeting to be “brave enough to take the step” of expanding the board.

“Others will run because it looks sensible,” Butler said. “Previously it was an impossible job.”

Former Selectwoman Donna McDaniel said the changes voted in by Town Meeting earlier in the evening were a good reason to hold off on expanding the board. “We need to see how the workload is going to go with the new town administrator role,” she said. “My suggestion is we wait on this particular proposal.”

In introducing the article, Al Hamilton, a member of the Town Manager Ad-Hoc Committee said expanding the Board of Selectmen would increase diversity on the board, as well as provide stability as individual members change.

But, that doesn’t mean we now have a 5-member Board of Selectmen. Because increasing the size of the board requires a Special Act of the legislature, a majority of voters will first need to approve the measure at the town election in May.