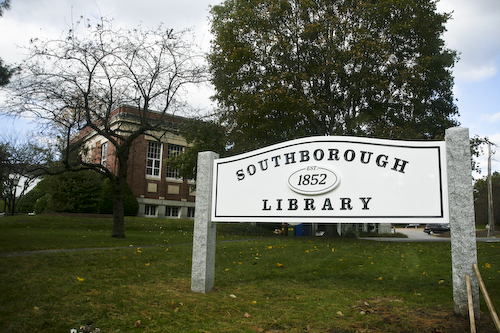 Above: Director Jane Cain called the Southborough Library the “cornerstone of Southborough, both figuratively and literally”

When it comes to talking budgets at Town Meeting, it’s a safe bet that the school budgets, which comprise 70% of the town’s spending, will take center stage. Not this year. Both the K-8 and Algonquin budgets passed on Monday with almost no discussion and almost no opposition. Instead, the budget that engendered the most debate this year belonged to the Southborough Library.

The debate centered on the library’s request to increase their staff by 12 hours per week, a request that was ultimately supported by a vast majority of Town Meeting voters. The Board of Selectmen opposed the request, saying the town cannot afford to increase services at the library given its current fiscal constraints. The difference between what the library requested and what selectmen recommended was about $10K of the library’s $393K budget.

Chairman of the Board of Selectmen John Rooney said when you consider $10K in the context of the town’s $47M budget, “we’re obviously not talking about a lot of money.” But Rooney said approving the request for new library services would send a bad message to other town department heads, all of whom were asked to maintain their current service level.

“Every department did that except the library,” Rooney told Town Meeting.

In a presentation to voters, Library Director Jane Cain said the additional hours were necessary to maintain the level of service residents expect, noting that library use has continued to increase over the past several years. She also warned without the additional staffing, the library would have to consider cutting operating hours.

“The library has been understaffed for years, and now we’re at a tipping point where we might have to look at reducing hours,” Cain said. “Demand for resources continues to grow as staff remains stagnant.”

Rooney said the argument about demand versus resources could be made by a number of other town departments like the Senior Center, Southborough Youth and Family Services, and Recreation, all of which submitted budgets with no increase in services.

“The Board of Selectmen is not anti-library. What we asked the library to do was same thing asked every other department to do,” Rooney said.

The Advisory Committee voted to support the library’s request, although the vote was not unanimous. Member John Butler said there is no such thing as “perfect consistency,” and while all departments were asked to avoid increases, judgement needed to be applied on a case-by-case basis.

If the applause Cain received after her presentation was any indication, Town Meeting seemed inclined from the start to give the library what it asked for, despite the urging of selectmen to exercise fiscal restraint.

Not all voters were happy about the decision. You can read the ongoing discussion about the library budget over on this post.

In all the times I’ve gone to TM, I have very rarely seen TM vote down additional money when asked. This TM was no exception (I remember one time when someone at TM said, “We are giving drunk sailors a bad name” with the spending items passed that year). If I headed any town dept, next year I would make a presentation that X additional dollars are absolutely needed. More then likely they will get what they want.

Nine thousand here, nine thousand there, it all starts to add up. Then there’s the school budget.

Didn’t TM turn down Planning? And I think they were requesting even fewer dollars than library.

Southsider is correct, but there is one more, the Town Clerk salary.
For the Town Clerk’s salary, Selectmen wanted a higher number, Advisory a lower and the higher amount was approved.

As noted Advisory and Selectmen both recommended a lower budget than requested by Planning Board, and the lower number prevailed in the vote.

For the Library, Advisory supported the Library’s amended-down number but the Selectmen wanted a yet lower number. The compromise number supported by Library and Advisory prevailed. During the budget process prior to Town Meeting, Advisory had worked with Library to trim the request in a way that both could support. We tried to bring the Selectmen into the process, but that did not succeed, and so the voters decided a contested question.