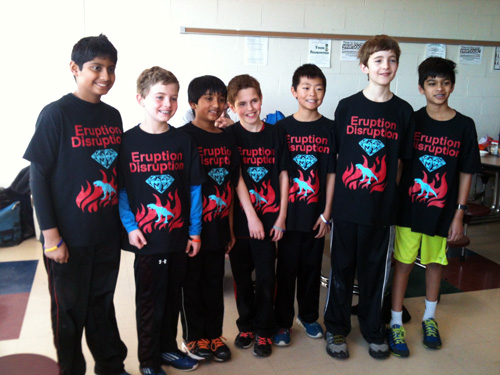 If you were asked to build a structure that could support more than 200 pounds using just bamboo, glue, and duct tape, could you do it? A group of Neary fifth graders did, and it earned them first place at last month’s Destination Imagination regional tournament.

The Neary team wasn’t the only Southborough one that met with success at the competition which shows off students’ creativity, teamwork, and problem-solving skills. A group from Woodward took home second place for an improvisational play they had just minutes to prepare.

Read on for the full story.

A team of 5th grade students from the Neary School won first place and a team of 2nd and 3rd grade students at the Woodward School in Southborough won second place for the Elementary level (kindergarten through 5th grades) last Saturday (March 16) at the regional level of Destination Imagination, a nationwide competition that encourages students to experience creativity, teamwork, and problem solving. Teams of up to seven children are tested to think on their feet, work together, and devise solutions that satisfy the requirements of the challenges. Every aspect of a team’s solution is determined and constructed by the children on the team, without adult interference.

The team of 5th grade students performed the “Twist-O-Rama” challenge, which involved building a structure designed to bear as much weight as possible while also withstanding twisting pressure. The team was permitted to use limited types of materials to build the structure, and the goal was to maximize the ratio of the weight borne by the structure to the weight of the structure. The challenge also required the team to perform an eight minute play that involved a surprising twist while the weight was being loaded on their structure. The team placed first in the Elementary category for their challenge, qualifying them to compete in the state competition to be held at Worcester Polytechnic Institute on Saturday March 30. In addition, the team was awarded the prestigious Renaissance Award, which was awarded to the one team from all the teams competing (all age groups, all challenges) who had the most outstanding design, engineering and performance. The team designed a structure out of bamboo, glue and duct tape that weighed only 22 grams, held 215 pounds and withstood six twist impacts, and performed a play in which Steve Jobs goes to Mars to search for gem with magical qualities. The judges commented on the team’s engineering prowess in designing a volcano prop with a battery operated air pump with an on-off switch operated by a clothespin that opened and closed a circuit, as well as the team’s attention to detail in the play, and their costumes and props.

The 2nd and 3rd grade team performed the “Change in Reali-Tee” challenge, which involved performing an improvisational play in which the only props or costumes that were allowed were plain white T-shirts, which could be drawn on with colored markers during the performance. Just before their performance, the team was informed of a dramatic change which had to be incorporated into their performance, and had 5 minutes to prepare a play and their props. The team was also given three random nouns that they had to use in a sentence, which was also to be incorporated into the play. The team placed second in the Elementary category for their challenge for their excellent work in performing a play about the disappearance of bread from the earth. The judges commented on the team’s creative use of their T-shirt props, particularly, their use of T-shirts and coordinated team movement to emulate riding in a car.

During this DI season, both teams were coached by Rupali Sharma, a teacher from Imagination Unbound, an after school program for children in Framingham that is focused on preparing the teams for Destination Imagination competition. During their training in DI, in addition to working on their main challenge, the teams’ teachers had prepared the teams to solve challenges instantly, which is another component of the competition.

The members of the fifth grade team, called “Eruption Disruption,” were:

The members of the second and third grade team, called “Destination Dynamite Ducks,” (or “3-D’s” for short) were: 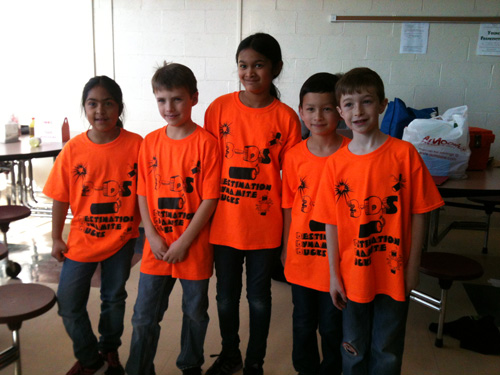 Above: Woodward students teamed up for second place at the Destination Imagination competition (contributed photo)