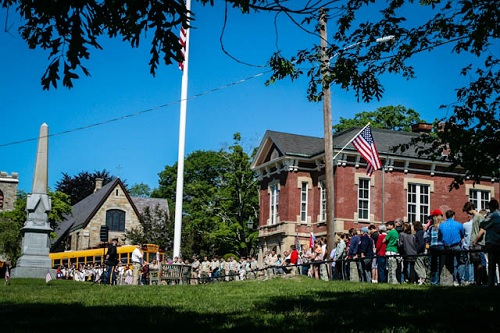 Above: Rememberance of fallen soldiers held at the Civil War Monument this last Memorial Day
(Photo by Susan Fitzgerald)

This Wednesday evening, veterans will hold a memorial at Southborough’s Civil War monument. The vigil will honor the lives lost at Gettysburg and throughout the Civil War including soldiers from Southborough.

Please join John Wilson, myself and others this coming Wednesday evening from 6:00 to 7:00 PM in a vigil to honor the 150th anniversary of the beginning of the Battle of Gettysburg.

Beginning at 1800 and at fifteen minute intervals – Ray Minnucci will recite the Gettysburg Address.

Also – we’ll recognize those soldiers from Southborough – that were killed at Gettysburg and during the Civil War.