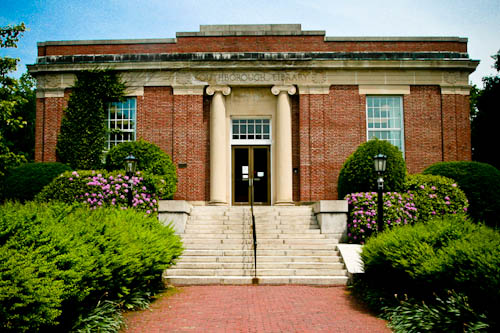 Above: The historic Southborough Public Library is nice to look at. But, as MWDN reports, its aging structure poses challenges. (photo by Susan Fitzgerald)

Three of our town departments made the local news this week. Here are some stories you may have missed.

Southborough library looking at future of aging building – from The Metrowest Daily News:
The Library Board of Trustees has begun the process of putting together an application for a $50,000 state grant to assist in a $75,000 study to determine what to do with its aging building.

“A lot has happened in 100 years,” Library Director Jane Cain said, noting that the building, built in 1911, has serious infrastructure problems that need to be addressed. (read more)

Southborough sells its hovercraft – from The Metrowest Daily News:
The town’s hovercraft, on the market since last year, has been sold, Fire Chief Joseph Mauro confirmed Monday.

Mauro said the department sold the craft – which had fallen into disuse in recent years because of training concerns– to a private buyer in Connecticut. (read more)

I think your anger at the school budget would be better received if it wasn’t perceived as a rant that was stuck at the bottom of every other post. We get it, the schools spend too much. Now what should we actually do?
Just my opinion.

Frankly, I don’t know. I have spent years trying to draw people’s attention to the unfairness of the continually increase in the expense associated with the schools. The riposte is that it ensures property values. Insufficient attention is paid to what we get for our money. Folks vote for whatever Gobron requests. It is so lopsided that I stopped attending Town Meeting this year and will likely not attend in 2014. I even started a Southborough Taxpayers group. Yes, I rant. A paucity of imagination I guess. Sorry.

You should volunteer for a position on a committee or run for office as others do. Simply attending town meeting and ranting – either there or on this blog – is not really going to change anything. You have to play to win. If you don’t care enough to play then you don’t really care.

Ask yourself if you care enough to reveal your name. Better people who have names have worked for change and have not had success. Not for lack of trying. I guess I should just continue to pay over 10K a year in taxes and belt up.

Another study? Let’s just get some funding to fix the thing. For 75K some serious work could get done. I could understand a 5-10K study, but 75? When Neary closes, we can just move the library into it.