The Southborough Library will host  Don Wilding’s slide show and informative lecture on Henry Beston Sheahan’s book The Outermost House and its impact.

The event is scheduled for Thursday, September 19 at 7:00 pm.

Nearly 85 years ago, Henry Beston Sheahan, a World War I ambulance driver turned naturalist, wrote a book, The Outermost House, about the small home he built himself in North Eastham, on the outer Cape. This book became an inspiration behind the creation of one of New England’s National Parks – the Cape Cod National Seashore. 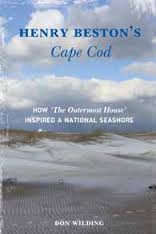 Don Wilding is author and co-founder and executive director of the Henry Beston Society.  He is an expert on the topic having penned the book Henry Beston’s Cape Cod and the related publication On its Solitary Dune.

He is also the producer for the upcoming 2014 feature-length documentary film, Henry Beston’s Cape Cod: Inspiration for a National Seashore.

In 2008, he led the society’s collaboration with the Cape Cod Museum of Natural History in Brewster on the exhibit, A Sense of Place.

His presentation “The Outermost House: How One house Inspired the National Seashore” is free and open to the public.