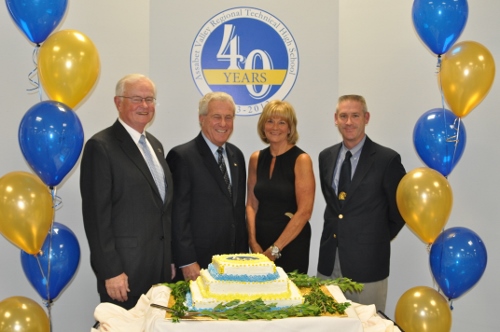 As AV celebrates its milestone, it also looks forward to a big future. They are in the midst of a $62.4 million renovation project.

That’s a change that makes a splash. There are others that were more gradual, reflecting the changing times.

At a recent celebration, former superintendent David Tobin reminisced about their beginnings. He laughed over the excitement  having one computer in the building, a unit that took up an entire room.

These days, Assabet boasts 1.2 computers per student and iPads. That is just a physical example of the school’s evolution.

When the school was founded, the focus was training students to graduate and go directly to the workforce.

That is still an option. But now students can also advance to colleges and universities, often with college credit already earned.

One example is the Computer Programming & Web Development program. Three juniors in this program are enrolled in Northeastern University’s College of Professional Studies where they take hybrid courses at no charge while still attending AV. When they graduate from AV, they will also have almost completed an Associate’s degree from Northeastern.

AV is planning more celebrations throughout the school year. They are asking alumni to update their contact information, by contacting Cindy Zomar at pr@assabet.org.

Right now, only 17 students are enrolled from Southborough, but they’re looking for more. If you are interested in more about their programs, visit assabettech.com.

Assabet is a great school. My son graduated as a precision machinist, went on to Mass Bay Community College to study computer aided drafting. He has worked at several high tech shops doing research and development projects, and is currently a firefighter here in Southborough. My youngest daughter also went to Assabet. She studied computer aided drafting, was valedictorian of the Class of 2005, graduated from College of the Holy Cross, and is currently a captain in the US Army attached to Special Operations. Assabet is no longer just a “voke”, it’s a well rounded school, with much thanks to people like Gene Carlo who really pushed to make it the school it is today.