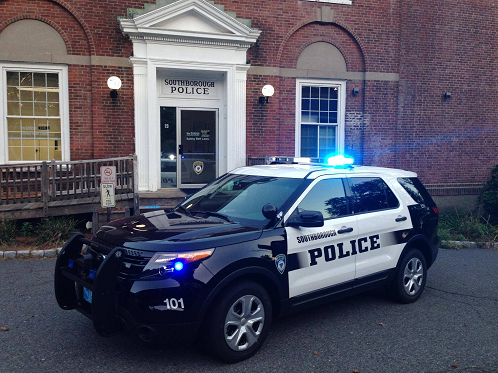 Although I publish the logs for both Southborough Police and Fire Departments, they don’t cover everything they are up to.

So, here are some updates on what’s happening with the departments: Two radio communication systems need upgrades, police share procedure for emergency cell phone calls, and a new cruiser was added to the fleet.

Police and Fire need your vote this Monday night
Both departments are hoping for the town to vote yes on Article 4 at the Special Town meeting on Monday.

The article will allow the departments to proceed with replacing the outdated Computer Aided Dispatch system. (This is the communication system between the departments and vehicles.)

The funds in question aren’t from taxes. They were a specifically designated for this project through “mitigation funds” negotiated by Madison Place development with the Zoning Board of Appeals.

In a Board of Selectmen meeting this summer, Police Chief Jane Moran informed the town that a delay in approving the funds would cost the town additional funds. A financial agreement is currently worked out with their vendor, as long as it is finalized before the end of December.

I spoke briefly with Fire Chief Joseph Mauro about the need for a new CAD.

I asked him to explain for the blog why the current system needs to be replaced. Mauro responded that the technology and equipment is outdated and slow.

He reminded me that computer systems degenerate over time. Since it originated with police before his department began to share the resource, he wasn’t sure how old it was. But he estimates between 10-15 years.

In terms of urgency, Mauro explained that he wants to replace the system before it crashes.

He also asked , “How many times have you replaced your computer or cell phone in the last 10 years?”

Grant request to upgrade portable radios
Last spring, The Metrowest Daily News reported on problems with the portable radio systems. (These are the radios carried by firefighters and officers in the field.)

The radios have areas of spotty reception, which could cause a real problem in an emergency situation. But replacing the system is expensive and upgrading the CAD was considered a higher priority.

Now that the CAD is (hopefully) about to be replaced, Chief Mauro is ready to pursue replacing the portable radios.

At Tuesday night’s BOS meeting, the chief was given approval to apply for a grant towards upgrading/replacing the system.

Let’s wish him luck on the actual grant getting approved.

9-1-1 for emergencies
Southborough Police are reminding residents to call 9-1-1 from their cell phones in cases of emergency.

Doesn’t everyone know that? Actually, no.

Just last spring, I received a well-intentioned e-mail from a relative. (It was one of those “forward-to-everyone-you-know-so-you-can-save-lives” e-mails.) The message claimed that tragedies occur when you “mistakenly” use 9-1-1 from your cell phone instead of other “correct” method.

I’m always skeptical of forwarded messages, so I tried to verify the authenticity. What I learned is what Southborough Police verified yesterday.

Whatever the case is in other states, trust 9-1-1 in Massachusetts:

If you are calling to report an emergency via cell phone, *SP (*77) AND *MSP (*677) are no longer the correct numbers for reporting an emergency in Massachusetts. When you are reporting any emergency using a cell phone (even from the highway), always call 9-1-1. You will immediately be connected to a 9-1-1 call center that is staffed by certified 9-1-1 professionals. Thank you.

A new vehicle on patrol
This morning, the police Facebook page shared a picture of their new “beauty”. It’s the newest addition to their fleet of cruisers.

I’m happy to admire it, as long as it’s from afar.

I recently wrote a white paper for a client that discusses emergency systems for public safety departments, and the desperate need to upgrade them.

There is a national initiative called Next Generation 9-1-1 that aims to update and improve emergency communications for our mobile, wireless society. Updating our CAD system is a needed step in this process.

Everything Chief Mauro says above is true – it’s crucial to update the CAD system so our police, fire, and other public safety departments can reliably serve the public.

Supporting this initiative is a no-brainer!

Perhaps we would be better off looking into a regional dispatch center.