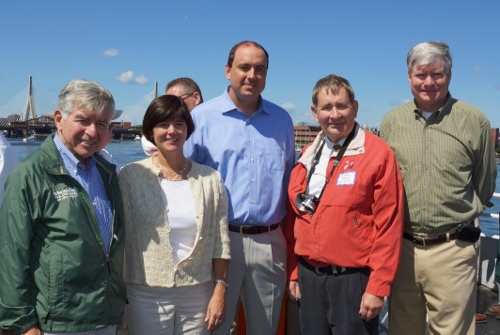 I have been extremely delinquent in sharing news from our State House representatives.

The last time I posted a round-up of their press releases was June! So here is what our elected representatives tell us they have been up to for the past few months.

[Note: If you wish you had known that Representative Dykema was going to hold office hours at Mauro’s this past September, I apologize. I missed that one. According to facebook posts, she will be at Heritage Day as usual on Monday, so you can try bending her ear then.]

Senator Eldridge, Senate President Murray Announce Legislation To Improve State’s Water And Wastewater Infrastructure (10/4/13)
Senator Eldridge (D-Acton) joined Senate President Therese Murray (D-Plymouth) to announce legislation that addresses the critical need for modernization and greater investment in the drinking and wastewater systems across the state at a press conference at the State House. This comprehensive legislation combines reform with increased commitments from the Commonwealth to improve existing partnerships with cities and towns, increase municipal options while incentivizing best management practices, and deal sensibly and realistically with the challenges in water and wastewater in the Commonwealth. (see release)

Representative Dykema and Colleagues Urge Congress to Amend Federal Flood Insurance Law (10/1/13)
Representative Carolyn Dykema and 50 state legislative colleagues are urging the Massachusetts Congressional delegation to advance HR2199, the Flood Insurance Implementation Reform Act. The proposed legislation would update the federal Biggert-Watters Act, passed in 2012, to ensure the fiscal sustainability of the federal flood insurance program that has provided subsidized flood insurance to residents of flood-prone areas across the country since 1968. HR2199 would address concerns that the 2012 Biggert-Waters Act will result in dramatic increases in flood insurance rates, set to take effect today, for many residents and businesses across the Commonwealth. (see release)

Representative Dykema Calls for Increased Funding to Cities and Towns for Water Infrastructure (9/19/23)
Representative Carolyn Dykema testified before the Joint Committee on the Environment, Natural Resources and Agriculture yesterday calling for more funding to be allocated to cities and towns for water infrastructure investment. The hearing was focused on the Environment Bond Bill which is a five-year blueprint for investing in environmental assets across the Commonwealth.  (see release)

Dykema and Eldridge Tour Boston Harbor Clean-Up (8/20/13)
Representative Carolyn Dykema (D-Holliston) and Senator Jamie Eldridge (D-Acton) joined community leaders and advocates from across the state for a tour of Boston Harbor on Thursday. Led by staff from the Massachusetts Water Resources Authority (MWRA) and the Boston Redevelopment Authority, the tour highlighted the important link between the investment in the Boston Harbor cleanup and the economic revival of the area. The tour also included an up close look at MWRA’s Deer Island Sewage Treatment Plant which is a centerpiece in the clean-up of the Boston Harbor. (see release)

Senator Eldridge Participates in White House Champions Of Change Event (7/26/13)
Senator Jamie Eldridge (D-Acton) participated in a Champions of Change event held at the White House on Tuesday, July 23. The event honored individuals for submitting a challenge at the National Day of Civic Hacking, a weekend-long event held on June 1-2 that brought together software developers of all skillsets to find solutions using publicly-released data to improve their community, state and country. (see release)

……..but do we have committee votes on the state web page? Any money for iPads in that high tech spending?

Only state in the union where a politician can stand next to Michael Dukakis and it is seen as a photo opp.