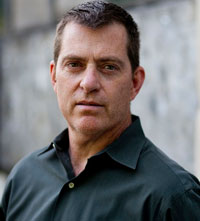 Left: Steve Ulfelder will discuss his new novel at the library on Thursday, June 5 at 7 p.m. (Photo submitted)

A summary of the novel follows:

Conway Sax is a man on a mission-this time in Los Angeles, where he uses his race-driving experience in a desperate bid to rescue Kenny Spoon, a washed-up TV star who’s been kidnapped. It’s a favor for Kenny’s mother Eudora, Conway’s dear friend and a fellow member of the Barnburners, his tight-knit maverick AA group.

After hauling Kenny back to Massachusetts, Conway finds himself caught between Eudora and her two sons: Kenny, and Harmon, a cop who resents his talented, troubled half-brother. Each member of the Spoon family distrusts and even despises the others, it seems… and each has a past full of dark secrets that may explain why.

“Wolverine Bros. Freight & Storage is tough and full of heart, just like its hero, Conway Sax. It’s fast-paced, hard-edged,  and so authentic that you can almost feel the grit beneath your fingernails.”

“Wolverine Bros. Freight & Storage solidifies Ulfelder’s place as one of the best crime novelists to come out of  Masachusetts since Dennis Lehane.”

Ulfelder is co-owner of Bellingham based Flatout Motorsports, a company that builds race cars.